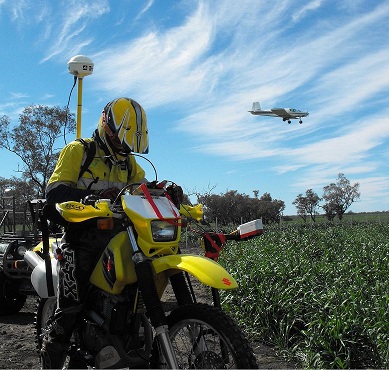 In the past 25 years, a considerable amount of research and development work has been invested in airborne and spaceborne, multispectral and hyperspectral imaging systems for use in agriculture. Yet, operational airborne and satellite remote sensing in agriculture remains constrained by matching platform availability to suitable daytime weather and illumination conditions, crop development, and availability of ground staff. Since the earliest patent descriptions detailing the use of light-emitting diodes (LEDs) and detectors for measuring absolute reflectance, transmission or absorption of targets, there has been  significant growth in the development of active optical sensors. The key advantages of proximal, active sensors is that they contain their own light source and if used in conjunction with synchronous detection, can be operated irrespective of the ambient light conditions (including at night). If the ratio of two wavebands are used, and the optical, sensor-target characteristics of each source are the same then derived band ratios are absolute, not distorted by path radiance effects and are insensitive to meter-scale variations in sensor-target distances so long as they are operated within the linear, optical response range of the internal sensors.  These sensors are currently deployed as hand-held units  in the field for manual scouting  or mounting on tractors or all-terrain vehicles (ATVs) configured with global positioning systems (GPS) and dataloggers for 'on-the-go' sensing. Vehicular deployment is usually limited to fallow or early-emergent crops, or in established crops where tramlines allow movement through the crop with limited damage to plants. Clearly there are many instances where deployment in established crops is discouraged due to the potential to damage them with vehicles. Given the limited power output and detection sensitivity of LED/photodiode-based sensors, operation of these sensors is limited to a few metres above the target. Deploying the sensors in ultra low-level aircraft is one option that avoids the need to move vehicles through the crop. Indeed, combining the desirable attributes of on-ground, active R/NIR sensors, including their relatively low cost, compact size and low weight, with the ability of low-flying aircraft to cover large tracts of ground very quickly, potentially offers crop managers a viable alternative to acquiring airborne imagery of the same field.