Since early 1996 we have witnessed the bold assertion once again of racism through what has been termed `Hansonism' (after Pauline Hanson, founder of .the Pauline Hanson One Nation Party), who was most prominent in raising in the contemporary context the 'bogeyman' of Black privilege in this country; with all of its ramifications, most especially access to excessive amounts of unwarranted Government funding, the covering up of the extent of such funding, without need of accountability.

The other side of the picture she has consistently painted of Aboriginal people is that they will not work, that they are criminal, that they cannot and will not control their children, and so on. In fact promoting the old stereotypes of Aborigines as being lesser beings than non-Aboriginal (except those of Asian origin).

AM, Chancellor, University of New England 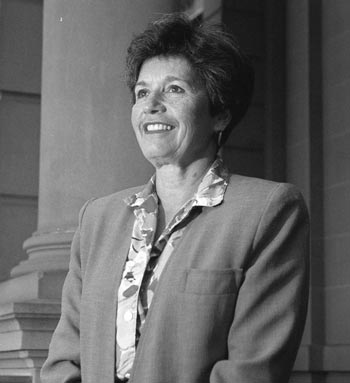 Dr Pat O'Shane was born in Mossman on 19 June 1941 to Gladys, an Aboriginal woman, and her husband Patrick O'Shane, an Irish boxer and unionist. O'Shane's mother moved the family from Mossman to Cairns to enable her children to receive a good education. O'Shane ended up the only Indigenous Australian child in her age group graduating from her high school, gained a scholarship and studied at Teachers' College and the University of Queensland, before teaching at Cairns High School for eight years. When her mother died O'Shane went into a deep depression and was hospitalised. On an Aboriginal Study Grant, O'Shane studied law at the University of New South Wales, graduated in 1976, and was admitted to the New South Wales bar.

O'Shane began practicing law as a barrister with the Aboriginal Legal Service in Sydney and then in Central Australia, O'Shane was head of the New South Wales Ministry of Aboriginal Affairs from 1981 to 1986, before her appointment as a magistrate. She was the Chancellor of the University of New England between 1994 and 2003.