Mr Frank Archibald, was born in a small shack in Obon, outside Guyra, which is to the north of what is today known as Armidale. Mr Archibald was born at the turn of the century, and it is estimated by his family that at the time of his death, Saturday, 18 October 1975, that he was 106 years old. 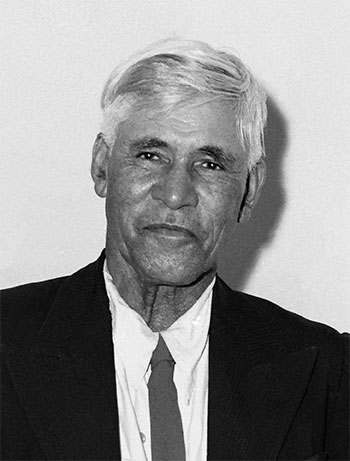 Frank Archibald was a revered member of the Armidale community and has left behind him a large kinship network.

Frank was a fully initiated elder and was able to speak seven different Aboriginal languages, understand a further two, and could also speak English. He was an expert bushman, and could make a Mia, which was made out of tree branches and stringy bark to keep out the wind and cold.

Frank was the eldest grandson of "King Billy" or "King Bobby", as he was known. His real name being Billy (Bobby) King. King Billy's photo now hangs in the Armidale museum. Frank's father was Scottish; his first name is unknown, all that is known is that his European last name was Archibald. Frank's mother was King Billy’s daughter, Emily King. Emily died giving birth to a baby daughter, leaving behind Frank (a young child at the time) and a younger brother Dick. Following the death of Frank's mother his father left them and his destiny is unknown.

Frank and his brother Dick were brought up by their grandparents in the Wollomombi/Ebor area, until Frank turned 12. Frank received a very strict traditional education. He was not allowed to go to the "white fella's school". Frank's grandfather watched the first train arrive in Armidale in November 1897. His grandfather then passed the news onto other groups in the area by singing a song called, "Wanglagee Wannla, Goverment Go", which tells about a new machine that has many turning wheels and bells ringing. This song was later sung by Frank himself over 2AD radio station, when Ray Brislan was the manager. A record was made of the song which was sent to the United States of America, where it was broadcasted on a national current affairs program.

At the age of twelve, Frank and his brother were given to their mother's brother, Mr Jack Cohen (old grandfather Cohen) to be brought up and properly educated in their lore. Jack brought the two boys up as his own, with his three boys and daughter – George, Bill, John, and Nellie (Kelly).

At the time of Frank's birth there were four Aboriginal camps in the Armidale area. One camp was situated on the slopes of the North Hill, a second near the Railway Station, a third was along the Grafton road, and a fourth was on the site of today’s Narwan village. A fifth site of considerable importance was a place where all the tribes that passed through the area, would stop and camp, which was where Armidale High School is located today.

Frank first met his wife to be, Sarah Morris, where the Narwan football gate is situated today, and apparently carved ‘Frank loves Sarah’ into a tree there, this tree was still standing until the middle of 1987. Frank and Sarah married when Frank was in his mid-twenties.

Frank and Sarah spent some of their married lives working on stations on the tablelands, mainly in the Wollomombi and Ebor district. Frank worked as a 'Black Tracker", first at Nymboida and later at Lismore, where the family were never accepted, firstly; because they were Aboriginals, and secondly; because they were given a town house to live in. Later they returned to the tablelands where they went back to the bush and station work. At these times when Frank and Sarah went in to Armidale they would live on a settlement on the top of North Hill, where the Armida le lookout is situated today. Sarah at these times often got work at the 'Booloominbah' homestead; now known as the Administration building for the University of New England; as a cleaner.

During the period 1937 to 1963 Frank and Sarah camped in rather primitive conditions at Walcha, while working on local stations. Whilst living at Walcha the Officer of the "Aborigines Protection Board" instructed them to go to a station at Burnt Bridge near Kempsey, where they were told accommodation would be provided for them. Frank went unwillingly, as he had never lived under supervision, he had always lived as a free person. Now he was to be watched over and cared for", with no free control of their lives.

Although Frank and his family stayed for seventeen years at Burnt Bridge they had a lot of unhappy memories of the experience, and a very strong distaste of the .. Aborigines Protection Board".

Living at Burnt Bridge the family grew, with five of the six daughters marrying men of the Macleay Valley.

Seeking work, kept the family constantly on the move. In the early 1950's Frank decided to move, from Burnt Bridge to a settlement at Yarra Bay, near La Perouse, in Sydney. There they remained for a year or two, until the local council decided to bulldoze the settlement down.

This destruction of their home, put the family on the move again; and just after Christmas in 1954 Frank's search for independence had still not been achieved. The couple, Frank and Sarah, moved back to Kempsey, but some of the children who were working on the Kurnell Oil Refinery stayed on in Sydney, until work ran out in 1955.

January 1956 found the couple and many of the family members on the move again. This time to Yarrawich, near Walcha, where they were given a few weeks pea picking. This didn't last very long as the rain came and destroyed the crop. At this stage Frank turned his eyes towards his home. He moved in steady stages with some of his family towards his birthplace, Armidale.

Frank wanted to spend his last few years in peace in Armidale. He found what he thought was a suitable camping spot at the east end of town, then known as the Armidale dump, where an Aboriginal family by the name of Dureau were living. There he found plenty of scrap iron to build a temporary accommodation. He didn't stay very long in the old hut because he got to know a Father Kelly, who was a Catholic priest.

Father Kelly offered to build him and his family a home to live in. It was an offer that was gladly accepted. With the help of his sons-in-laws and the material from a consecrated church, from Hill Grove, the house was completed in 1957. During 1956 to 1957 there was a steady influx on the site near the Armidale dump. There were relations of the Archibald family including nephews, grandsons, daughters, and in-laws of the old couple.

There were also a couple of other families who moved into the area at that time – the Briggs and the Schmutters. By the end of 1956 the population of Koories in the area was well over 120.

Frank and Sarah stayed on in Armidale until their deaths. They survived many hardships and saw many changes for their children and people.

Frank was renowned by the Armidale community for his knowledge and interest in all Aboriginal issues and particularly in the education, both formal and informal, of his people and others.

The Armidale Koorie/Goorie community, family and friends wish to acknowledge their love and respect for Mr Frank Archibald (better known as "Bubba" meaning Grandfather), through the dedication of a lecture series provided by the University of New England, as a living memorial to Mr Frank Archibald. May Frank, his memory and his people live on through this lecture.