Today’s world is one of digital, wireless, and Bluetooth connected touchpads, tablets, and styli. These computational devices have come a long way from the first programmable machines (Bombe 1939; Colossus 1943), invented in the race to crack the Enigma and Lorenz ciphers of World War II. In the world of digital technology, messages are written by typing, keying, or scribing, and saved as electronic datafiles on hard drives, smaller and smaller physical keys, or virtually on servers and cloud. In this section “The Digital Age” we explore the relatively recent technological developments that have revolutionised the creation, transmission, and storage of the written word. 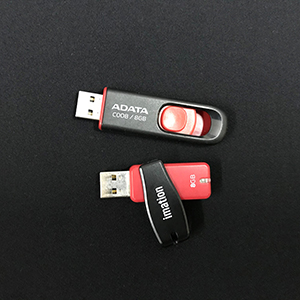 Computers are electronic devices capable of processing information stored in binary code (0’s and 1’s). Conventional wisdom asserts that a computer will have a central processing unit (CPU), some form of memory (data storage), input devices (e.g. keyboard, mouse etc), and output devices (e.g. monitor screen, printer). The 21st century, however, has seen the development of combination in-put/out-put devices (e.g. touchscreens). Advances in technology (hardware and software) have resulted in significant changes in the size and functionality of computing devices. Machines that once filled whole rooms or which were bound to office desks, and data once stored on miles of tape and multiple discs, have become highly portable, being used on the lap, carried in the palm, or in the pocket.

Two ancient devices, the Antikythera mechanism (c.150 BC) and the Astrolabe (c.1st century BC), are widely thought to be the earliest analogue computing machines (see UNEMA Cabinet 31 for an exhibition on time calculating devices: ‘Time To Explore’). Between the 1st century BC and 19th century AD a number of other analogue computing devices were invented, including geared-calendar astrolabes (AD 1235), the sector (16th century), the slide rule (c.AD 1620), a tide-predicting machine (AD 1872), and wheel-ball-and-disc differential analysers (AD 1876). In 1833 Charles Babbage invented a “difference engine” that could be programmed using punch cards. However, as every part of this machine had to be made by hand, government funding for the project was soon discontinued. Analogue computers became more sophisticated in the early 20th century, but they were still not programmable. Then in the 1930s two important developments occurred. In 1934, the engineer Tommy Flowers began to use electronics and vacuum tubes in the London telephone exchange, and in 1936 Alan Turing published his seminal paper ‘On Computable Numbers, with an Application to the Entscheidungsproblem,’ which set out the principles of the “universal computing machine.”

Programmable computing machines played a critical role in British codebreaking activities during the Second World War. Following his success with the London exchange, Flowers was commissioned by Max Newman and Alan Turing to build a programmable, electronic digital computer, to help break the German Lorenz S2 40/42 cipher machine, which (with twelve rotors), was infinitely more complex than Enigma. Flowers responded by building Colossus (1943). Colossus utilised an enormous number of vacuum tubes, used paper tape for data input, and could perform a variety of Boolean logic operations. It was delivered to Bletchley Park’s codebreaking operations on 18th January 1944. Later, Colossus Mark I had over 1,500 thermionic values, and Colossus Mark II over 2,400 values. With their superior speed, digital devices using vacuum tubes began to replace analogue devices at about the same time that electronic circuits began replacing mechanical and electromechanical circuits.

In 1955 vacuum tubes began to be replaced by bipolar transistors, which were smaller and used less power. Then in 1958 the first integrated circuit was built by Jack Kilby. However, six months later, his germanium chip was superseded by Robert Noyce’s silicon chip. This chip led to the development of the first single chip microprocessor, known as the Intel 4004.  Rapid development in chip technology led to the invention of the System on a Chip (SoCs). SoCs are complete computers built on a microchip the size of a modern coin. Since 1958 these chips have become exponentially more powerful, and integrate billions more transistors, yet consume only a few watts of power.

The world’s earliest mobile computing devices were very heavy and needed mains power to operate. It was not until battery technology significantly improved that laptops and other devices became lighter and more popular. It is the combination of improved battery technology and revolutionary SoC microchips that has made today’s mobile phones and tablets possible. On display here is the first-generation iPad produced by Apple in 2010. This device consists of a flat touchscreen surface on which the user can scribe with a stylus or touch-type with their fingers to input data. The iPad can also be connected using Bluetooth technology (wireless communication using short-range radio frequencies) to external hardware (e.g. keyboard, mouse, stylus), and other computational devices. In form it is like the Roman wax tablet and stylus, but in function it can create, erase, transmit, and store immeasurably more written material. 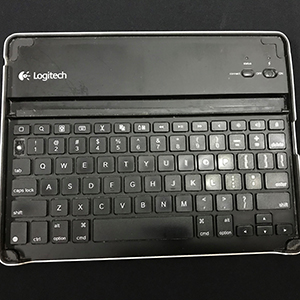 A keyboard is the mechanism used to input (key) data into machines like typewriters and computers. Each key on the keyboard represents a letter of the alphabet, or a number, or an essential character, while combinations of keys can be used to extend the range of symbols and characters available. With the evolution of the touchscreen, physical keyboards have been replaced on some devices by virtual pads. Keyboards are normally described according to three layouts: Mechanical (referring to the physical placement of the keys), visual (referring to the labelling on the keys), and functional (referring to the software responses programmed to each keystroke). All three aspects can vary to take into account the scripts of different languages, the ergonomics of hand movements when typing, and the different programmable commands required for different kinds of computing activities. The keyboard exhibited here uses Bluetooth to connect to computing devices. 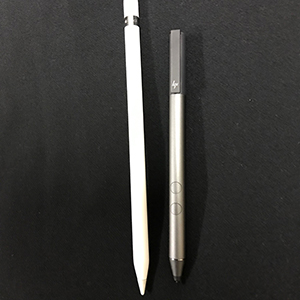 “Pen computing” is the term used of any kind of computing that requires the use of a stylus or pen-style implement to input commands into a computer by scribing on the surface of its screen. The stylus is used physically like a pen or pencil to draw, write, point, or select options on the computer. There are two main types of computing styli: active and passive. Active pens tend to be larger, incorporate electronics, and carry more features. Passive styli do not incorporate electronics. Patents for handwriting capturing computing devices have been issued since 1888. The earliest styli required users to employ the stylus or light pen on their desktop computers as an alternative to the mouse and keyboard. This proved to be ergonomically tiring and caused styli to fall out of popularity. With the advent of portable touchscreens and complementary use of the mouse, there has been a revival in the popularity of the computer stylus. Leading stylus designs of the 21st century (like the two shown here), incorporate pressure sensitive and angle detecting software to create greater capture accuracy and simulate more accurately the tactile experience of writing with pen and paper. 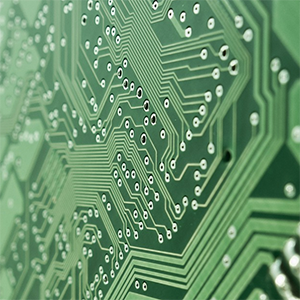 The internet (short for interconnected network) is a global network facilitating communication and information exchange. It is formed by linking independent networks using internet protocol suite (IP). The internet is essentially a carrier that supports the hyperlinked documents of the world wide web (www), electronic mail (email), telephony, and file-sharing services. It has no centralised governance. Each network within the internet sets its own regulatory policies. ICANN (the internet corporation for assigned names and numbers) only manages the provision of two “namespace” systems (IP Address and Domain Name). Since 1995 the internet has revolutionised human culture, communications, and commerce. In November 2006, it was listed by USA Today as one of the new seven wonders of the world. The tools for accessing the internet are a computational device, a modem with access to a telecommunications network (e.g. access to broadband coaxial cable, copper wire, or fibre optic networks), internet browser software (to connect you to your ISP), and an account with an Internet Service Provider (ISP).

The World Wide Web (www or “web”) is just one of many services available on the internet (“net”). The web is a collection of interconnected documents (web pages) linked together by hyperlinks and URLS. HTTP (hypertext transfer protocol) is the language used on the web to facilitate the transferal of information. The web is searched using browser software (such as Microsoft internet explorer, Mozilla Firefox, Safari, or Google chrome). These allow you to navigate from page to page using hyperlinks.

The world is moving away from the storage of information (data files) on physical discs (floppy & cd), built-in hard-drives, and external hard-drives physically located on-site. Instead computing is moving towards The Cloud - a global network of remote database servers. These database servers are physical collections of computer hard-drives networked together to provide mass data-storage solutions. Referred to as a “server-farm,” a server network provides on-demand data storage space which can be rented for a monthly fee. The data stored on a server in the global server network can be accessed from any computational device located anywhere in the world, so long as that device can connect to the internet. The Cloud is essentially a data storage service that removes from the consumer the need of owning and maintaining the physical hardware and software required for storing large amounts of data.

Return to the codebreaker exhibition page.