The medieval era (c.5th-15th centuries AD) saw the first sustained developments in codebreaking with the flowering of the Islamic golden age (8th-14th centuries AD). The first textbooks and encyclopedias of cryptography were published in this period, while in Europe cryptography was pursued in Hebraic (Atbash Cipher) and Biblical scholastic studies. With the Renaissance (c.14th-17th centuries AD), new impetus was given to cryptography by the political and economic needs of the Papal and Royal courts of Europe and England. In this section, our exhibition looks at the Arab discovery of frequency analysis used to break monoalphabetic ciphers, and the invention of the cipher wheel by Leon Battista Alberti.

In AD 750 Arabic scientists realised that letters in many languages appear with regular frequency, and that this frequency can be used to crack ciphers. The first surviving account is found in a 9th century manuscript written by the Arab author Abu Yusuf Yaqub Ibn Ishaw al-Sabbah Al-Kindi. In English, the most common letter is e, then t, a, o, i, n, and s. Least frequent are j, q, z, and x. Monoalphabetic substitution systems are easier to break using frequency analysis than polyalphabetic systems like Alberti’s Cipher and Trimethius’ Tableau.

Count The Frequency Of The Letters In This Phrase 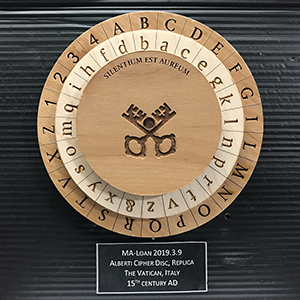 In 1467 Leon Battista Alberti invented an encryption machine of two concentric metal discs. Each disc is divided into 24 equal parts. The outer disc has the letters of the alphabet (minus n, k, y, j, u, and w), and the numbers 1 to 4. The inner disc displays the letters of the Latin alphabet and ‘et’ in random order. Setting the starting (index) position of the discs, the first three words of a message would be encoded, then the index setting changed. This creates many (poly) different relationships between the cipher (inner) and plain (outer) text alphabets, and alters the frequency with which letters appear, thereby confounding frequency analysis.

Look at the Alberti Cipher Disc.

Which cipher letter is assigned to the plain letter C?