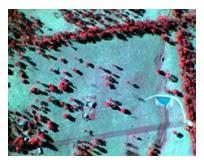 The value of soil carbon in terms of soil health and production benefits is widely recognised in agricultural systems. However, carbon and biomass are quickly becoming valuable commodities in their own right, as seen by emerging carbon trading schemes. While the coverage of agriculture under any emissions trading scheme is uncertain, the agricultural community are positioning themselves in readiness for such a scheme. A total farm carbon (TFC) map, providing an inventory of above- and below-ground carbon stocks, offers farmers and producers a useful management and decision making tool as they consider carbon emissions and sinks.

Numerous models and calculators have been developed for estimating greenhouse gas emissions, with few also considering carbon sinks. However many models are restrained by their adherence to GHG accounting methodologies determined by national and international standards or rely on broad-scale state and national data. These tools ignore both site specific conditions and the clear need expressed by farmers for accurate whole-farm carbon audits which include both carbon sources and sinks. Conventional methods for determining both soil and biomass carbon are time consuming and costly. A case study, established on a UNE grazing property located on the Northern Tablelands of NSW, is being used to test the hypothesis that information derived from ‘conventional’ precision agriculture tools may be combined with other, possibly freely-available data (for example from land management agencies) to create accurate farm-scale soil carbon inventories. It is proposed that a suitable model may be inverted for an a priori stratification of farmscapes to guide soil C sampling. A comprehensive dataset including radiometric (gamma ray spectroscopy), multi-temporal soil electromagnetic induction (EM38), under storey biomass (using CropCircleTM sensors), gross land use classification, a soil map, digital elevation model and aerial photography has been collated. Supervised classification was imposed on the dataset to create real-time “carbon landscape units” and regression analyses conducted to determine the correlations between the derived landscape units and soil organic carbon as measured from an array of  soil cores.

For landscape units on the mid- to lower-slopes, soil carbon was found to be moderately correlated with multi-temporal EM38 and Thorium (radiometric) count data (R2 0.50). A second tiered classification based on land use (open paddock and treed areas) increased the correlation (0.60 and 0.98 respectively). Preliminary results suggest the application of airborne or satellite sensor-derived products may not only strengthen the robustness of the farmscape stratification process, but may also create a farm-scale carbon map which considers both above- and below-ground carbon stocks.