Self assembling monomolecular layers (monolayers) including C16-C18 alcohols and C18 acid, and surface active films such as oils (such as Aquatain) and mixtures (for example Water$avrTM) continue to attract interest for their ability to resist surface evaporation when applied on the surface of water bodies. Monolayer thicknesses can be as small as 2 nm, whereas surface active films, in particular oil-based products, may be up to several micrometres thick. The presence or absence of a surface film can often be discerned visually by watching surface wavelet behaviour or by the addition of test oils- the response of both intimately connected to the effect of the surface film on surface tension.

Knowledge not only of the presence or absence of a surface film, but the thickness of the film is an important 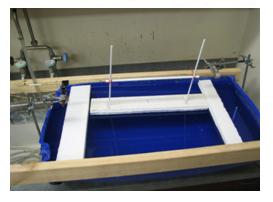 requirement for film management (replacement, replenishment). Active or passive optical techniques for measuring the presence/absence or quantity of a surface film are desirable as they can be non-invasive, their response can readily be integrated with electronic recording or actuation, and their response should not be perturbed by any local changes in sensor position relative to the water surface (for example height above water). Moreover, a remote optical technique can be integrated into a static sensor or into a roving, GPS-equipped sensor for mapping the extent of a surface film. However, the small thicknesses and therefore small probe interaction volumes involved, pose a significant challenge to any optical sensing methodology. This project investigates a range of optical surface film sensing techniques including visible-near infrared spectral reflectance, thermal emissivity and reflectance and ellipsometry. An additional technique that combines the known effect of surface films on the surface tension of water and an interrogating laser-ripple methodology is also under investigation.