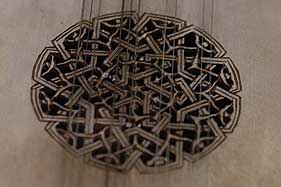 Music's collection of non-western instruments is the largest at a tertiary institution in Australia. It includes two Indonesian Gamelan ensembles (slendro and degung) which are actively used by student groups, a Cook Island Drum ensemble, a number of West African Drum ensembles (Ewe, Ashanti, Shona and Mande), numerous Indian musical instruments, as well as a variety of other instruments from throughout, Asia, Africa, and the Pacific. A recent addition to the collection was a gift of Matsuri Bayashi (festival music) instruments from Armidale's sister city Kanuma in Japan.

UNE Music holds an impressive collection of western instruments. Practice rooms may be booked through the Administrative Assistant. In addition, there is an extensive collection of string, brass, and woodwind instruments used by students for 'second' instrument instruction. Furthermore, the school's collection of percussion instruments includes a marimba, a xylophone, a pair of tympani, tubular bells, and a tamtam. UNE Music also maintains a keyboard lab with 10 keyboards used for the instruction of keyboard harmony. Other electronic instruments and equipment as used in a standard contemporary music ensemble are also available for access by students.

The Caron Website is devoted to one of the pre-eminent composers of the 15th century.

Firminus Caron's application to the polyphonic mass, was at the cutting edge of the newly emerging contrapuntal style. It is highly intricate, and clearly demonstrates the exactitude and precision of a skilled master of the first rank. His sacred essays show an architectural design beyond that of some of his contemporaries.