Permanent and impressive, inscriptions in stone and metal are remarkably durable. Many ancient cultures used stone and metal to make written records. Limestone, basalt, and granodiorite were popular in Egypt. Marble was used throughout Greece, Rome, and the Mediterranean. Granite and jade were used in China, obsidian and jade in Mesoamerica, and even stone cliffs and caves in India. Inscriptions are also found on artefacts of copper, bronze, iron, tin, silver, and gold. Their production, however, is relatively slow and expensive, and mistakes made in a text cannot be easily fixed. In this section: “Hard Media” we look at just some of the stone and metal objects held in UNEMA and consider the writing technology used to create them. 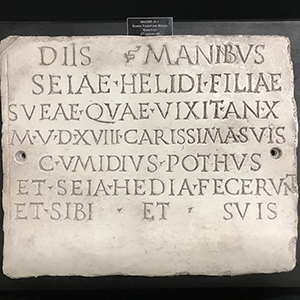 The study of writing on stone and other durable substances is known as Epigraphy. Epigraphers are interested not only in the messages inscribed, but also in the technical aspects of the inscriptions - the technologies used to create them, the size and shape of the letters inscribed, and even the punctuation used (if any).  Sometimes these things can help us date when an inscription was made.

In Rome, stonemason workshops specialised in the production of epigraphic inscriptions. There were three main steps to creating an inscription: writing the draft message, preparing the stone to be carved, and carving the inscription. The draft of the message could be provided by the customer or formulated by a workshop scribe. Next the ordinator or quadratarius prepared the surface of the stone by smoothing it, creating margins, gridlines, and alignment marks for letters, and maybe even the shape of the letters to be carved. This could be done using chalk, charcoal, paint, thread, or faintly incised lines. Finally, the scriptor or lapicida would carve out the letters on the stone. To make an inscription stand out, the letters could be highlighted using red or black paint, but this may not have been common. Sometimes mould-made bronze letters prepared at a foundry were also attached.

The inscription shown here is a Roman marble stele (tombstone) from the 1st-2nd centuries AD. The Latin inscription on the stele reads:

“To the spirits of the dead, to Seia Heliodis their daughter who lived 10 years, 5 months, eighteen days. She was greatly beloved by her family. Gaius Umidius Pothus and Seia Hedia made (this monument) for themselves and their family.” 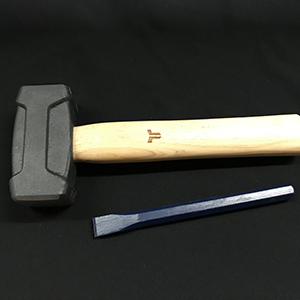 The writing tools of the ordinator and scriptor include the hammer (malleus), the chisel (scalprum), the square, compass, and level, and sometimes the drill. Two types of chisel were particularly useful: the straight-edged chisel and the nib-pointed chisel. The graffito technique (which used a hard, sharp point to incise deep letters), is one of the reasons the Romans almost exclusively used peperino stone in their monuments until the time of the Gracchi (130-120s BC). The chisel was used to broaden and rectify graffito cut lettering because it could produce more rounded “U” and “Џ” string-cut incisions. This practice decreased towards the end of the Roman Republic with the introduction of the “V-section trench” technique. The shape of this cut (as its name implies), was created by driving a chisel obliquely from two surface points down towards a single point. This “V” cut revolutionised epigraphic writing and permitted harder stones like travertine and Luna marble to be used more widely. 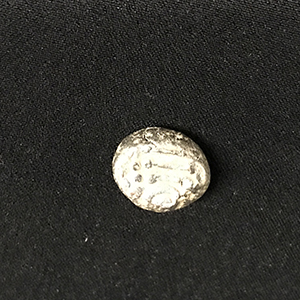 Many metal artefacts in antiquity had messages written on them. Coins, in particular, were effective at conveying quite complex messages succinctly. The study of coins is called Numismatics, and here we look at just four different coins held in UNEMA. Most coins have two sides: an obverse (“heads”) and a reverse (“tails”). Traditionally, the primary message of a coin was placed on its obverse. Ancient coins were made by one of two techniques: minting or casting.

In minting, a metal blank was decorated by either punching or striking. In punching, a punch bearing the desired motif was hit with a hammer to ‘punch’ that motif onto the surface of the coin. In striking, a metal blank was placed between two dies. The lower die formed the obverse and the upper die the reverse of the coin. Each die had incised upon it an inversion of the images and legends to appear on the coin. When the upper die was struck with a hammer, this pressed the inverted images onto the relevant sides of the metal blank. The technique of casting is very different from that of minting.

In casting, molten metal was poured into a mould that bears the desired coin design. The most famous examples of cast coins are the brass, bronze, and iron cash coins produced in China and South-East Asia since the 4th century BC. Some cast coins, however, were also made in Kent and Dorset in the 1st centuries BC and AD.

The first documented coins of the Indus Valley civilisations are punch marked coins from the 7th century BC. These coins were usually made of silver and their designs were created by punching each symbol onto the coins with a separate punch. This silver Gadisnod coin from India’s Gupta Period (4th-6th centuries AD) was also minted by punching. Although the Gupta dynasty was famous for its gold struck coinage, it also produced several silver coins. Following Kushan tradition, these coins typically depicted the king on their obverse and Indian deities on the reverse, with legends written in Sanskrit. The Gupta dynasty traded widely with China, the Mediterranean, and Near East. Although some Roman coins were permitted to circulate in their original form in southern India, slash marks were added to show the rejection of intrusive claims by foreign powers. 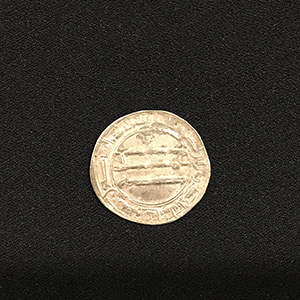 This silver coin, issued by Calif Harun al-Rashid (AD c.763-809), was struck at the Baghdad mint in Iraq. The epithet "al-Rashid" is variously translated as "the Orthodox," "the Just," "the Upright," or "the Rightly-Guided." Al-Rashid ruled from 786 to 809, during the peak of the Islamic Golden Age. He established the legendary library Bayt al-Hikma ("House of Wisdom") in Baghdad (Iraq), which flourished under him as a centre of knowledge, culture, and trade. In AD 796, he moved his court to Raqqa (Syria). In AD 799, when a Frankish mission came to offer al-Rashid friendship, he sent presents back to Charlemagne's court including a clock. Charlemagne’s retinue considered the clock to be sorcerous because of the sounds and mechanical tricks it displayed on the hour. Parts of the fictional One Thousand and One Nights are set in al-Rashid's court and involve him in its tales. This bronze cash coin with central square hole was the first coin-type cast in Korea. It was introduced in the 15th year of the reign of King Seongjong (AD 996). Cast in bronze and iron, the coin took the form of the standard Chinese cash coin with centralised square hole. It also adopted the character design of a coin that had been cast in the reign of the Tang Dynasty’s Emperor Suzong (AD 756-762). The characters on the obverse of the coin, read top to bottom and right to left, are kon won chung bo. The Korean coin differed from its Chinese counterpart only on the reverse where it added two further characters tong guk meaning “Country of the East.” This brass cash coin from Japan’s Edo Period was originally cast in the 6th year of the Tenpō Era (AD 1835). It is called Tenpō Tsūhō after the characters inscribed on its obverse. The character Tenpō refers to the era in which the coin was cast. The character Tsūhō means ‘circulating treasure.’ The coin’s Kao (stylised signature mark) belongs to Gotō San'emon, a member of the Gotō family of the Kinza mint. The Gotō family were descendants of Gotō Shozaburo Mitsutsugu (1571-1625), an engraver and metalworker from Kyoto, appointed by shogun Tokugawa leyasu to oversee the Edo mint. The production of this coin stopped with the introduction of the yen. After more than 35 years circulating as currency, today the coin is sold in Japan as a charm of good fortune.