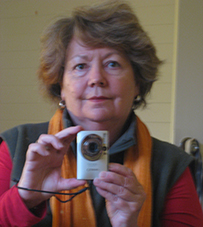 Jane O'Sullivan's research is informed by the concerns and approaches of Critical Animal Studies, Film Studies and Gender Studies.  She has a particular interest in writing creative nonfiction, with an emphasis on the processes of moving between visual and written forms.  Her research and teaching in areas related to the field of Critical Animal Studies focus on representations of animals in film and television and their presence in zoos and popular culture more widely.  In addition, she has a particular interest in gendered power relations and their representation in film, theatre, and prose, with particular attention to female embodiment, gender equity in contemporary workplaces, and masculinities in Australian film.  She is a member of the School of Arts Post-Human Literary and Cultural Studies research group.

O'Sullivan, Jane (2014) "Mixed Media: Moving between painting and writing" in Creative Manoeuvres: Making, Saying, Being – Refereed proceedings of the Australian Association of Writing Programs 18th Annual Conference (25-27 November 2013) – an article on the pedagogical possibilities of using painting as a way into writing about the cultural experiences of horses.

O'Sullivan, Jane (2013) "Picturing the Pig in Pork and Porky" in Antennae: The Journal of Nature in Visual Culture, Issue 25 – 2013, pp. 46-49
ISSN 1756-9575 – a painting, and a discussion of the process of moving between painting and writing about representations of pigs, especially in films.

O'Sullivan, J and R. Spence (2010) "Beyond Hostile Borders: Re-negotiating the Gendered Embodiment of resistance and Agency in the film Some Mother's Son" in Journal of Motherhood Initiative for research and Community Involvement 1(1) 2010, pp. 202-212

Beck, W., K. Dunne, J. Fisher, J. O'Sullivan & A. Sheridan, (2008) "Turning up the heat: Collaboration as a response to a chilly research environment" in TEXT: The Journal of Writers and Writing Courses
Vol. 12, Issue 2, e-publication

Sheridan, A. & O'Sullivan, J., (2003) "What You See Is What You Get: Popular Culture, Gender and Workplace Diversity" in Davidson, M. and Fielden, S. (eds.) Individual Diversity within Organizations, John Wiley & Sons, Chichester, West Sussex, pp. 297-312