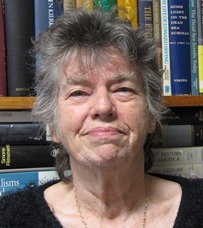 Professor Ware has been an historian, a sociologist (working on prostitution), a demographer, a human rights advocate, a femocrat, an aid bureaucrat, a diplomat (High Commissioner to Zambia and Malawi, Ambassador to Angola) and now is that rare creature: a Professor of Peace Studies. Given such a varied background, she is strongly sympathetic to students who are combining their studies with non-academic employment, the demands of a family and the need for some resting time. However, given the potential impact of peace studies on the real world where people are dying and fleeing as refugees, she is also strongly devoted to critical thinking. Before criticizing the biases of others, we should understand our own. Passionate defence of the rights of the disadvantaged is vital, but must be based on rational grounds and an in-depth understanding of the actual situation.

My current focus is on working with students to maximize their achievement of their full potential.

Hybridity (i.e. forms of government which mix Western models with non-Western traditions)
The roles of governments and governance in maintaining peace
Transitional Justice (especially the impact of the International Criminal Court and the balance sheet associated with Truth and Reconciliation Commissions)
Trends and differentials in Aboriginal mortality and morbidity (especially in urban areas and NSW)
African development

Professionalization of Peace Education through Wiki, Networking and Innovative Teaching Methods. Leader of 18 month project which brought together a consortium of the Universities and Stakeholders in peace education ie potential or actual employers of people engaged in peace studies from the defence forces and police to members of government departments and INGOs.

Helen Ware, A Profile of the Italian Community in Australia, Co.As.It, Melbourne.

The Recruitment, Regulation and Role of Prostitution in Britain from the Middle of the Nineteenth Century to the Present Day, University of London,1969.

“What does the person on the street corner want ? Growing peace through democracy: issues with hybridity’, in H. Ware et al. 2014.

“Not everyone is Christian: Reconciliation and forgiveness in Buddhism and Islam”, Religion and Peace Commission, International Peace Research Association, World Congress, Istanbul, August, 2014,

“Not the universal remedy: The diversity and impact of Truth and Reconciliation Commissions in Africa”, AFSAAP Conference Proceedings, Dunedin, 2014.

“The Hazara and Afghan Diaspora in the United Kingdom, Europe and Australia”, British Society for Population Studies Conference, Swansea, 2013.

With John Idriss Lahai, “ Educating for peace: The sociocultural dimensions of grassroots peace education as a tool for national reconciliation and social forgetting in Sierra Leone”, African Conflict and Peacebuilding Review, 2013

With Dele Ogunmola, “Probing the roles of governance and greed in civil strife in West Africa”, in The Economics of War and Peace, 2010.

“The World Bank in Africa”, in Issues of Sovereignty, Tony Bennett Publishers, 2005.

With Carlos Arnaldo, “HIV/AIDS and national economic planning”, Proceedings of the IUSSP, Tours, 2003.

‘Thoughts on the course of fertility decline in Sub-Saharan Africa’, 1994

“Origins of Post-War Italian Immigrants” in The Australian People: An Encylopedia of the Nation 1988

With David Lucas, ”Fertility and family planning in the South Pacific”, Studies in Family Planning.

“The economic value of children in Asia and Africa: Comparative perspectives”, Papers of the East WestPopulation Institute No. 50, 1978.

With Jack Caldwell, ‘The evolution of family planning in an African city: Ibadan, Nigeria”, Population Studies,  1977.

‘The social and demographic impact of international immigrants on Melbourne’ in I. Burnley ed. Urbanization in Australia, 1974.

‘The limits of acceptable family size: evidence from Melbourne”  XX 1973.

With Jack Caldwell “The evolution of family planning in Australia”, Population Studies, 1973.

With Belinda Tynan “The use of Wiki in teaching/learning peace studies: A platform for the disadvantaged”, Fifth Pan-Commonwealth Forum on Open Learning: Access to Learning for Development London, 2008.

Women, Population and Development Trends since 1984, Population Bulletin of the United Nations, 1988.

Population and development in Africa South of the Sahara: A review of the Literature. 1978

International Union for the Scientific Study of Population