Published 16 June 2020
When PhD student Terence Sibanda and his young family left Zimbabwe and came to Australia to study he knew it was going to take a lot of hard work and determination to succeed. 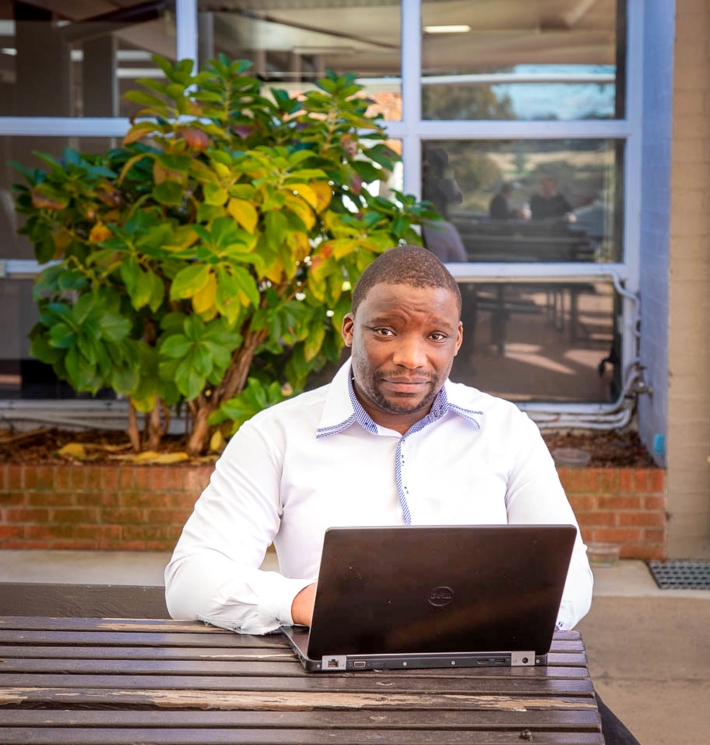 Originally from Bulawayo, a big city in southwest Zimbabwe, Terence arrived in Armidale in February 2017 to undertake a PhD in poultry science at the University of New England.

“UNE ticked all the boxes for me – it’s highly regarded in the field of poultry science, supportive of students and has a large community of international students.”

Terence’s PhD is founded upon a major industry-funded project on the nutritional management of over 18,000 free range laying hens.

The study, which involved tracking the hens as they ranged and keeping record of their feeding habits, generated huge quantities of raw data.

“UNE’s computational analytics team, CASI, and the Department of Science and Technology initially guided me to analyse the radio frequency time series data while I learnt R programming and SQL, a statistical programming and a database management language,” Terence said.

“I became fascinated by the precision agriculture aspects of the project and what the data revealed about laying hens.”

According to Dr Isabelle Ruhnke, Senior Lecturer in Animal Science and one of Terence’s PhD supervisors, learning essential analytical skills is an important but often intimidating aspect of most PhD studies.

“It is Terence’s strength how he developed the key skills needed for data management and research. His use of opportunities that come his way is remarkable. He is an exceptional example of the professional and personal development we facilitate at UNE,” Dr Ruhnke said.

Terence regards Dr Ruhnke as a mentor and credits her with teaching him to “think like a scientist.”

“I was not a seasoned scientist when I came here. Isabelle taught me to observe, to think critically and to synthesize data. She also taught be how to be a resilient scientist as it was a big change for me to study in Australia”.

The ‘nutritional management of laying hens’ project, and the innovative use it made of big data and technology, generated considerable industry interest. Terence was invited to present his findings at three international conferences and five national conferences. In addition he has published 12 international peer-reviewed journal articles, presented 5 conference posters, has two oral presentation to his credit and won the best poster award at the Australian Poultry Science Symposium 2020 since he started his PhD.

Terence admits that studying for a PhD while also being there for partner Buhle and their two little girls while they settled in a new country and town was tough.

“It was my reality, I just had to work hard to make it happen. There was nothing I could do to change it really. I made sure to make time for Buhle, the children and my studies. I worked late most nights when they were all asleep.”

Terence is quick to add that they had a warm welcome in Armidale and settled quickly.

“The people were very friendly and having a common language helped too. I also like the milder climate as I had previously worked in Canada where it was very cold.”

Growing up in Zimbabwe farm animals and agriculture were an important part of Terence’s life.

He completed an honours degree in Animal Science at Lupane State University after school before moving to Canada to do volunteer public engagement work for Canadian Food Grains Bank, a charity organisation that specialises in eradicating global hunger.

“I continued my volunteer work as an agriculture educator when I returned to Zimbabwe, but what I really wanted to do was study at an international university with a reputation for quality education. I learned about the PhD opportunity online, spoke to Dr. Ruhnke and a local agent and that is how I came to UNE,” says Terence.

Terence will complete his PhD in July and hopes to remain in academia, pursuing an academic career in precision agriculture, nutrition and animal health.

“Terence played an essential role in attracting new industry funding for another three-year project and as such makes an incredible valuable contribution to the UNE,” Dr Ruhnke said. “We are so blessed that he is part of our research team and I am very proud of his achievements.”