Q and A with philanthropist and donor Max Schroder

Published 30 May 2018
Since 2008, UNE alumnus Max Schroder has provided some 40 scholarships to support Indigenous students pursuing degrees in education, nursing, medicine and law. Last year he won a prestigious award for his philanthropic work in higher education, but it’s never been about accolades. Here he talks about his motivations, his mother’s example and what experience has taught him. I grew up in humble rented accommodation in the working class Sydney suburb of Belmore. My sister and I had bedrooms in what had been the dining room, created out of sheet-iron partitions. But there wasn’t anything remarkable about our circumstances; there were lots of people like us.

My mother Ella was one of my main inspirations. Her father thought that education was wasted on women, so he prevented her from accepting a scholarship to a selective high school. She was very frustrated that her own education had been cut short and became a self-taught intellectual. My mother taught me the value of education, inspired me to learn and made sure that I didn’t waste any opportunities.

Two or three of us hauled ourselves out of Belmore North Primary School – not everybody got the same chance – and were accepted into a selective primary school Opportunity Class at nearby Enfield Primary School. That was the beginning of my leg-up to the selective high school Canterbury Boys High School, where ex-Prime Minister John Howard was a year ahead of me. Some things fell in my lap. I was lucky, lucky. But I would never have gone on to tertiary education except that I got a scholarship to Armidale Teacher’s College. But, again, I didn’t waste that opportunity. Working class boy makes good.

You completed your BA (Hons) and MA (Hons) at UNE during 13 years of part-time study.

Yes, after finishing my NSW Department of Education Teacher’s Certificate I was appointed to Yagoona Primary School in Western Sydney. All scholarship holders were bonded for three years after graduation, and I later found myself at the Armidale Demonstration School, where I taught demonstration lessons for Armidale Teacher’s College students. Three years earlier I had been on the other side of the desk, so to speak.

While I was teaching in Sydney the only way I could further my academic qualifications was to study by what was then called “correspondence”, and the only institution offering correspondence courses was UNE. After my transfer to Armidale I was able to attend UNE evening classes after school. The part-time study was, of course, in addition to pursuing my teaching and lecturing duties, raising a family with my very supportive wife, and playing basketball, representing Armidale and UNE.

The qualifications achieved through part-time study provided a platform for my career in education as a lecturer and administrator, and ultimately the establishment of my own higher educational institution. Our college eventually became the listed company NAVITAS Ltd, which, upon my retirement, provided the funds to enable me to assist others from disadvantaged backgrounds to gain the opportunities I enjoyed.

Where did your interest in providing the Indigenous scholarships spring from?

The class I got when I started teaching at Armidale Demonstration School was a remedial class, which was effectively every kid they didn’t know what to do with. It was a grade 3/4/5 and about one-third to one-half of the kids were Aboriginal, from East Armidale. Many were living in shanties around the tip. When they went home there was nowhere to study, no power and they were lucky to have candles to read by; many were pushing it uphill. I used to give one kid my cut lunch every day because he had nothing to eat.

It was a challenge. I had never had anything to do with Aboriginal people before. But I was well aware that many of these kids were dragging this baggage along behind them from day one. Anything I could do to help them get over or around the challenges they faced always proved worthwhile. The rewards came from watching these kids succeed. Several of the boys were in the school rugby league team, which I coached. The team was hugely successful over three years before the boys went on to high school, and I saw that motivation and effort were there in abundance. I realised that whatever the reasons for their weak academic performance, it was not due to any lack of effort. They simply lacked opportunity and direction. My role became clear to me. When I visited the school many years later, I was very pleased to see that one of those boys, Bill Widders, was a teacher at the school.

It goes all the way back to my remedial class at Armidale Demonstration School. I used to use a couple of the older Indigenous girls to mentor others, to teach them to read and that kind of thing. It’s important to recognise that we all come from different backgrounds and have different support. It’s about identifying what a person’s issues are and being able to offer them relevant help. Mentors can be very good at doing that. The overall graduation rate of my scholarship students is now slightly better than for all-comers to UNE. It’s paying off.

Why was it important to you to help those who were disadvantaged?

Why not these kids? I didn’t need the money and thought this was the best use for it. I thought hard about who needs education most and wanted to come up with something I could address that wasn’t too enormous in scope. Projects need focus if they are to succeed.

Students have reported that your support extends far beyond financial assistance. What sort of interactions do you have with the students?

If I can, I like to get to know them personally and I am always happy to relate. We try to host a regular luncheon and I’ve arranged for some to have eye testing and to get spectacles, which has made a big difference. I’ve been prepared to extend the scholarship if students need to take some time off for family reasons. It’s whatever works, that’s what I’m interested in.

Some of the early graduates still send me Christmas cards. It’s nice to hear about their career progression and lives. Many say that they would like, one day, to be in the position to do what I have done.

Many of the students you have supported are the first in their family to attend university and to graduate. What difference do you hope to make through the scholarships?

I am hoping the difference will be long-term and wider, not just that I helped out ‘Gary’ or ‘Mary’. I am hoping that Gary or Mary will be an exemplar for someone else, at the very least their own kids but also family, friends, community members. I am hoping it has an aspirational effect; that others see the opportunities available to them, that it provides a different role model to the good footballer or netballer.

Why have you sought to ensure the longevity of your scholarship program through a bequest?

I am not looking for self-aggrandisement, but by putting my name out there, maybe others who know me might think about doing something like this themselves. If I can trigger one or two to do that, then good. You can do a lot of things before you die; there’s no need to wait, but I would like to encourage others to do something similar after I’m gone. The intent is to keep something going that will benefit higher education for Indigenous people well into the future.

Ten years after it started, how do you feel about the scholarship program today?

My pleasure in seeing students graduate has not faded. It’s a tough thing to complete a degree; you have to be disciplined, keep your head down and learn how to think, develop survival techniques and tough it out, while undergoing (in most cases) early adulthood issues. It’s not easy for anybody, and when you pile on top of that Aboriginality and a disadvantaged background, it’s a tough ask. I am proud of and pleased for anybody who gets through. It also gives me cause to reflect on the experiences of my mother and the women for whom education was not wasted. 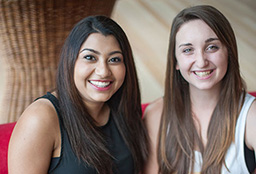