Earth sciences at UNE deal with our planet's geological and prehistoric past and the cataclysmic processes that shaped the earth. Our internationally-recognised staff has diverse expertise in vertebrate and invertebrate palaeontology, biostratigraphy, tectonics, as well as sedimentary, igneous and metamorphic geology.

John's research contributions have primarily focused on documenting the palaeo-biodiversity of Australian Cambrian and Ordovician biotas (ca. 444 to 541 million years ago) and using these key fossils to answer major questions relating to evolution, biogeography and palaeoecology during this critical time interval. He has also used these fossils in the relative dating and correlation of strata around the globe in order to refine the geologic timescale. The multidisciplinary nature of his work includes numerous publications on taxonomy, phylogeny, biostratigraphy, biogeography, taphonomy and palaeoecology.

John's current research focuses on Cambrian (540-510 million-year-old) fossils, especially from the Flinders Ranges and the globally significant Emu Bay Shale Konservat-Lagerstätte on Kangaroo Island in South Australia. John is very active in the Australian and international palaeontological communities. He was the Secretary of the Association of Australasian Palaeontologists from 2006 to 2010, is currently a corresponding member of the International Subcommission on Cambrian Stratigraphy, and serves on the editorial boards of the peer-reviewed journals Alcheringa, Memoirs of the Association of Australasian Palaeontologists, and Zootaxa.

Phil is especially interested in Australia's own Mesozoic past, particularly the range of dinosaurs and other vertebrates. Working with the Australian Opal Centre in Lightning Ridge, Phil is investigating an exciting new cache of dinosaur and other vertebrate fossils from the Early Cretaceous of Australia. His other main research focus lies with the dinosaur fauna of the Late Cretaceous Wapiti Formation (Alberta, Canada) and its intermediate position between the polar dinosaurs from Alaska and the better-known fauna from southern Alberta and Montana. Phil's research is multifaceted, covering a range of subject areas systematics including taphonomy, behaviour, palaeopathology, and palaeoecology.

Phil has earned an international reputation having appeared on numerous documentaries and as a scientific consultant for various films including March of the Dinosaurs, Walking With Dinosaurs 3D, Planet Dinosaur, and The Great Canadian Dinosaur Hunt.

His international reputation is for studies of conodont microfossils, the Palaeozoic and Mesozoic tectonic framework, evolution and palaeogeography of East and SE Asia (eastern Gondwana and the Tethys ocean basins), and for studies of the Permian Triassic boundary and end-Permian mass extinction in China and more recently in Australia. Recent major research projects also include high-precision U-Pb zircon dating of volcanic tuffs (ashes) in Permian-Triassic sequences in China and Australia and Permian-Triassic timescale calibration.

A number of HDR (MSc. and PhD.), honours (GEOL400) and undergraduate (ERS381 and SCI395) Earth Science research projects are available at UNE. Please contact the relevant academics for more information.

Earth Science in the Media

Volunteer to dig for dinosaurs! (August 2014)

We also maintain a small core library, with a selection of drill cores from Eastern Australia.

The Mineral, Rock, Fossil and Drill Core Collection is available for research work undertaken by all students and staff of UNE, as well as other universities and research institutions.

Facilities are available for the preparation of thin, polished thin and polished sections, including fluid inclusion plates.

The Thin Section Facility is available for research work undertaken by all students and staff of UNE.

Operated and curated by:

A USGS heating-cooling stage is available for fluid inclusion studies.

If you are interested in some of the projects we are undertaking or have ideas that fall into similar areas, please contact: 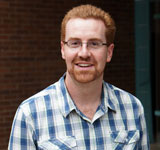