Cryptography in the modern era (20th century AD onwards) is characterised by the most rapid and extensive developments in technology, agency, and theory. In just one century cryptography has contributed to the creation of computational devices (from Bombe and Colossus to computer, internet, and cloud), the founding of dedicated government agencies (Room 40, GC&CS, Bletchley Park, Government Communications Headquarters, Arlington Hall, NSA National Security Agency, US National Bureau of Standards, and the Defence Advanced Research Projects Agency), and the application of theories from the fields of pure mathematics and quantum physics. In this final section, our exhibition explores two key moments in modern cryptographic history: The Enigma Machine of World War Two; and, the conceptual foundations of the Quantum Leap that cryptography is yet to undertake. 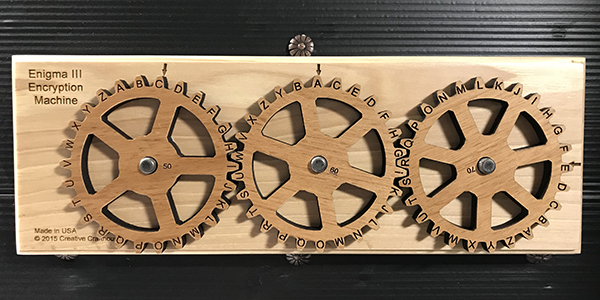 Enigma was first broken by three Polish mathematicians using a branch of pure mathematics known as group theory. The first Enigma message broken by the British at Bletchley Park was decoded on 20 January 1940. To prevent the Germans from realising this, the British invented a spy ring led by a master spy, codenamed Boniface, to explain apparent leaks of information that had actually been obtained by cracking Enigma.

From left to right what 3 letters have been set as the key? 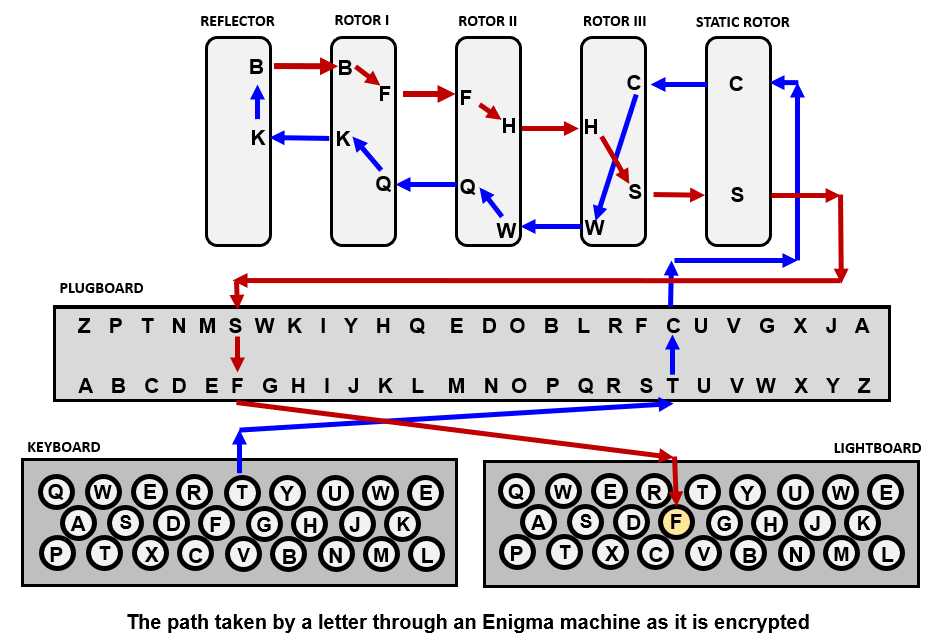 Enigma messages were started with the key that was used to encrypt them, followed by the body of the message being sent. Each key was three letters long and was repeated once. For example, the key “CAE” would appear as “CAECAE” at the start of a message encrypted by Enigma. During World War Two, Enigma keys were changed by the Germans every 24 hours. Cryptography has changed enormously since World War Two. Today the field is led by physicists and mathematicians. Encryption systems like Public-Key Encryption (P.K.E.), which employs two large, mathematically related numbers as encryption keys, have been used since the 1970s. One powerful mathematical relationship is that of prime numbers (numbers divisible only by themselves and the number 1). The larger the prime numbers used to encrypt a message are, the harder it becomes to decrypt a message by calculating which numbers were used. The two largest prime numbers discovered so far have more than 7 million digits each.

The word ‘bit’ is shorthand for ‘binary digits.’ Bits are written using a notational system of either “0” or “1.” The bit is the smallest unit of information used by computers. Stored together, bit multiples are called bytes. The terms ‘64-bit encryption’ and ‘128-bit encryption’ refer to the length of the key used to encrypt data, and because a 64-bit key can have as many as 20 digits, the enormity of calculating the prime numbers used as encryption keys becomes readily apparent. Since 1976 governments have adopted the Data Encryption Standard (D.E.S.) to protect sensitive data. The D.E.S. works by breaking messages down into blocks of 64-bits, each of which undergoes encryption 16 times using a 48-bit long subkey. This system, which has been secure for a long time, is becoming increasingly vulnerable to brute force attacks (decryption attempts utilising mass-computing resources to calculate every possible key). To solve this problem, cryptographers are now looking to the world of quantum physics (quantum mechanics). Two quantum mechanics concepts of particular importance for cryptography are Superposition and Chaos.

Superposition holds that any quantum element can be in several states simultaneously. The difference between ordinary and quantum computing is that where ordinary bits exist as either a “1” or a “0”, quantum bits, called Qubits, can hold both values simultaneously. The significance of this is that when a quantum computer performs an action on one qubit, it has in fact performed the operation on two different values at the same time. When it performs an action on 2 qubits, it has actually performed that operation on 4 values simultaneously. As qubits are added to equations, so the computing power increases exponentially. In 1994 Peter Shore demonstrated how a quantum computer could crack in minutes a 25-digit cryptographic algorithm that it would take all the computers on earth centuries to crack. Cryptographers are currently looking at the quantum properties of polarised photons (the basic unit of light which acts as both a particle and a wave), as a means by which to transmit encrypted messages.

In Chaos Theory the butterfly effect refers to the idea that small variants in a complex system can, in time, produce large variants; and, that changes within chaotic systems are not random, but interdependent: ‘If a butterfly flaps its wings in Brazil, a Tornado may be set off in Texas.’ Using this theory, cryptographers have been working on ways of embedding messages within chaotic masking signals. For example, in 2005 calibrated laser transmitters and receivers were used to send secure AbstractChaotic signals (light-based signals embedded in chaos), through 120km of fibre optic cable around Athens. Such systems have the potential to increase the security of data sent by broadband. 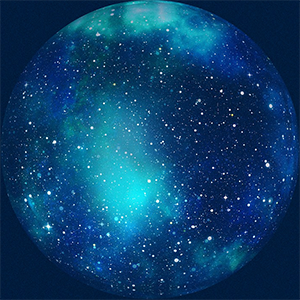 Now you have explored the exhibition ...

Go to our Codebreaker Challenge and have a go at cracking our code for the chance to win a prize! The competition closes at 5pm EST on Wednesday 28 August 2019. Good luck!

If you've completed the challenges throughout these exhibition pages, you can check your answers at the end of the exhibition landing page.