Published 04 March 2019
Danila Marini grew up in the suburbs, but has become an expert in the welfare of sheep. 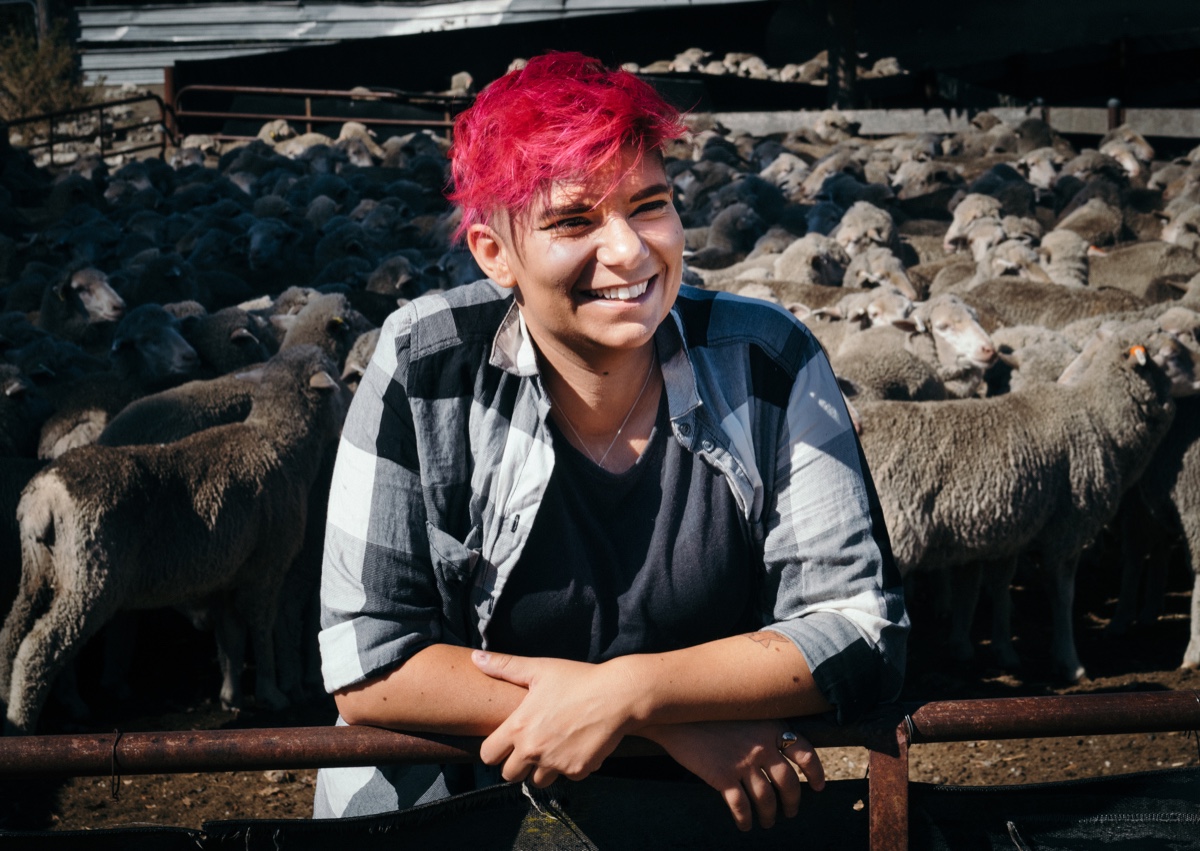 Image: Dr Danila Marini, a UNE post-doctoral researcher, is assessing the effect of virtual fencing on the welfare of sheep.

Since ancient livestock herders began erecting barriers of brush and stone to contain animals, fencing has been a time-consuming and expensive business for farmers.

Imagine, then, the virtual fence: an invisible line on the landscape that animals will not cross, which can be created on a map on a tablet, and moved or erased at a touch.

After decades of research trial and error — lots of error — the concept is now a reality, at least for cattle. The rapid minaturisation of technology means that the solution may soon be applied to sheep, and that’s where UNE post-doctoral student Dr Danila Marini steps in.

It’s important that virtual fencing works not just for livestock producers, but in the best interests of the animal, Danila says.

“I’m looking at sheep welfare as it relates to virtual fencing. I’ve started from scratch, to establish whether sheep can be trained to observe virtual fencing — spoiler: they can — and now I’m measuring the impact on their welfare.”

The LambEx 2018 Young Gun is supported by the Rural R&D for Profit program run by the Federal Department of Agriculture and Water Resources, with investments by several universities (including UNE), CSIRO, and Agersens, the company commercialising the technology.

Decades of research into virtual fencing has arrived at a workable model in which all the necessary technology for animal training — location systems, animal warning mechanisms, power source — are contained in a GPS-enabled collar.

Animals are warned of the presence of the invisible “fence” through an audio cue and then, if those are ignored, a short mild electric pulse is delivered from the collar.

“We’re looking at how sheep react to the audio cue or electric pulse from a virtual fencing collar, and see how that compares with other routine things they would encounter. Our research suggests that virtual fencing signals are comparable to things like a dog barking or being tipped over during shearing.”

Danila is also researching the validity of virtual fencing for rotational grazing systems. Rotational grazing is a term that covers a number of strategies for grazing animals at high numbers in short duration, and then moving on allowing the pasture a lengthy recovery period.

The most intensive of these methods requires a big investment in fencing infrastructure. Danila’s project is looking at whether virtual fencing can cut the costs of permanent infrastructure while retaining the benefits of time-limited grazing systems.

It’s not your typical line of work for someone brought up in the city — in Danila’s case, on the outskirts of Adelaide.

As a child, she encountered farm animals on her father’s hobby farm, and then she went to an agricultural high school which led, in turn, to Roseworthy Agricultural College and an Animal Science degree.

An Honours degree focusing on intrauterine growth restriction (poor growth of the fetus) and how that affected an animal’s reactions to stress later on in life led to Danila working with sheep, and sheep behaviour and welfare — which led to UNE.

“I like the idea of helping animals. My PhD was into self-medication of sheep, to help them get through procedures like castration and tail docking.” (It was difficult to draw a strong conclusion about the potential of self-medication, Danila adds: pain relief is provided if the analgesic is incorporated into pellets.)