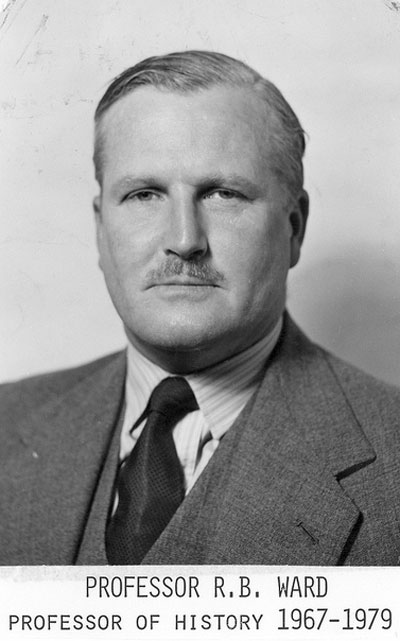 The Russel Ward Annual Lecture honours the memory and legacy of one of the University's most renowned scholars, Emeritus Professor Russel Braddock Ward. Ward taught at UNE from 1957, and was Deputy Chancellor of UNE from 1981–1989.

Russel Ward authored a number of distinguished works, including The Australian Legend (1958), A Nation for a Continent (1977) and Finding Australia (1987). He delivered the inaugural lecture on 25 August 1986. Formerly sponsored by the UNE Union, the Russel Ward Annual Lecture is now maintained by Humanities.

A memorial gathering for Russel Ward was held at UNE on 18 August 1995. Russel Ward: A Celebration, (ed. C. Bridge, University of New England Union, 1996) was published the following year.

This year’s Russel Ward lecture was presented on 10 September by Dr Hannah Forsyth who is a historian of work, education and capitalism at the Australian Catholic University, the author of A History of the Modern Australian University and is currently working towards a new book, tentatively entitled Virtue Capitalism on the history of professions in Australia and globally.

Her lecture, entitled "Frontiers of the New Cold War: universities, expertise and class conflict in contemporary Australia," historicised the conservative opposition to expertise in contemporary politics, arguing that this reflects a kind of class conflict that has emerged globally since the 1970s.  As she argued, the material interests of managerial capitalism are now in conflict with the sorts of morality derived from professional expertise and on which professional and academic authority rests.

Click here to listen to the Russel Ward Lecture 2020 recording.