The history of secret messages (steganography) and encrypted writing (cryptography) is ancient. In Egypt stone inscriptions with altered hieroglyphs have been found in the tomb of Khnumhotep II (c.1900 BC). In Mesopotamia a clay tablet was made recording phonetically encrypted recipes for pottery glazes (c.1500 BC). Likewise, stories of messages hidden under the wax on wax tablets or tattooed onto the shaved heads of slaves are found in the work of the Greek historian Herodotus (c.440 BC). In this exhibition we begin by looking at the Ancient Spartan steganographic technology of Scytalae and explore some of the key conceptual tools that underpin the development of cryptography in antiquity. 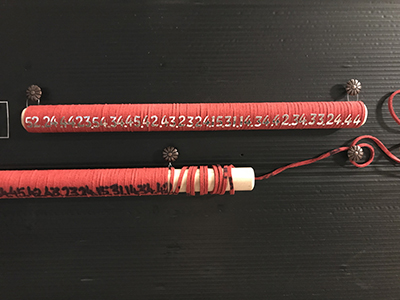 According to Plutarch, when the Spartans sent out an admiral or general, they made two round pieces of wood exactly alike in length and thickness. One they kept themselves and the other they gave to the commander. These pieces of wood were called Scytalae. When they wished to send an important message secretly, they wound a narrow strip of parchment around their scytale, leaving no gaps, and wrote what they wanted. Then they unwound and sent the parchment without the scytale to the commander. No one could read the message, because the letters had become disconnected, unless they took the matching scytale and wound the parchment onto it.

Can You See The Hidden Message?

Look at the Spartan Scytalae shown.

Can you see the full message on the scytale that hasn’t started unravelling? 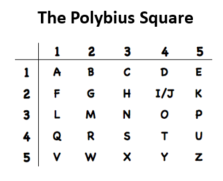 Polybius (c.150 BC) arranged the letters of the alphabet into a 5 x 5 grid (with i and j sharing a cell) and gave the numbers 1 to 5 to each column and row. Each letter, therefore, is represented by two numbers:

Can You Decrypt This Message?

NB: now you can decrypt the Spartans’ hidden message as well!

Text-only version of the Polybius square:

Julius Caesar encrypted his messages using a substitution cipher which exchanged the first letter of the alphabet with the fourth letter, and so on. This cipher is known as a Caesar shift. English has 25 possible shifts.

Click here for a text version of the Caesar Shift (PDF).

Can You Decrypt This Message?