In this section on “Printing” we explore how the development of softer writing media like papyrus, parchment, and paper fostered revolutionary new formats and production techniques for written texts. Three inventions in particular are examined here: the scroll, the codex, and mass printing technologies of woodblock, moveable type, and printing press. Since the mass production of printed texts has not removed the need for convenient, individual writing implements, we will also consider the mass production of writing tools like the lead pencil and the ballpoint pen.

A scroll is a roll made by joining together sheets of papyrus, parchment, or paper. Papyrus scrolls were made by laying papyrus sheets (kollemata) of the same size side by side, with their horizontal fibres facing the same direction. Each kollema was made to overlap the next by c.1cm. The overlap (called a kollesis) was then glued together using a paste of flour and water with a little vinegar. Scrolls could be made up of more than 20 kollemata and regularly reached 9m in length. For reading and writing the only practical way to handle these lengths was to roll them up. Scrolls were rolled with the writing facing inwards to protect it from rubbing and damage. The outside of the scroll was usually left blank. To help with rolling, sticks (called umbilici), slightly longer than the height of the papyrus, were attached to each end of the scroll. The Romans stored scrolls vertically in umbrella stand-like containers or horizontally on shelves. A protruding label, called a sillybos, was added to each scroll to help identify its contents. The scroll shown in this exhibition is made of brown wax paper and pine umbilici, held closed by a burgundy pleather tassle.

Neither Scroll Nor Codex

Several silk scroll formats also developed in China. Handscrolls of painted silk were common from the Eastern Han Period (AD 25-220) to the Tang Dynasty (AD 618-907), and silk Hanging Scrolls for calligraphy and painting developed from silk banners early in the Han Dynasty (AD 206-220). However, as lengthy scrolls were cumbersome to unroll and consult several innovations in binding techniques occurred in the Tang Dynasty (9th century) to produce formats half-way between the scroll and the codex. Two notable formats are those called ‘sanskrit’ or ‘sutra’ binding and ‘whirlwind leaf’ or ‘dragon scale’ binding. Sanskrit bindings are scrolls folded with accordion-like pleats to facilitate access to the middle of the scroll without unwinding it. Whirlwind leaf binding pastes leaves of writing of varying lengths onto a scroll in overlapping sequence. When rolled up these are indistinguishable from traditional scrolls. When open, each leaf is individually accessible, avoiding the need to unwind a lengthy scroll to access its centre. 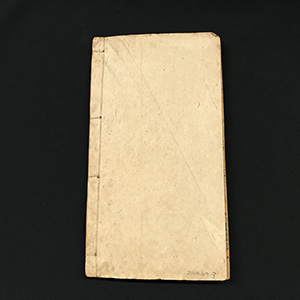 A codex is a book made from leaves of papyrus, parchment, or paper bound together (usually at a spine), using glue, stitches, or staples. Although the term ‘codex’ refers to any book in this format, its technical meaning has been restricted to mean only bound, handwritten manuscripts in this format. The codex is thought to have developed as an alternative to the scroll. The advantages provided by the new format include that its bound leaves could hold writing on both sides and be accessed in any order. The hard board covers used to bind codices afforded greater protection, and avoided the scroll’s cumbersome need of rolling. Later, when the title of a work was added to its spine, this also avoided the problem of the accidental detachment of sillyboi from their scrolls.

Suetonius claims that Julius Caesar (100-44 BC) was the first to send letters in codex form. Certainly, by the end of the 1st century AD, folded parchment notebooks called pugillares membranei were in use. From the 2nd century AD onwards the codex became the preferred reading format of the West, and between the 4th and 8th centuries AD many of the works that had not yet been transferred to codex format were lost. Codices continued to be produced by hand by scribes in the scriptoria of monasteries, universities, and merchant booksellers until the printing revolution of the 14th century.

The evolution of the codex in China began in the Tang Dynasty (9th century AD) with the development of Folded-leaf pamphlets, followed by the development of Butterfly binding for books in the Song Dynasty (AD 960-1279). Developments in binding continued to be made with the creation of Wrapped-back binding in the Yuan Dynasty (AD 1271-1368) and Stitched binding in the Ming (AD 1368-1644) and Qing (AD 1644-1917) Dynasties. The combination of the codex format with the development of woodblock printing made China the world’s printing powerhouse until the 14th century AD. The Chinese codex displayed here is a copy of Confucius’ Book of Wisdom. It has a handmade paper cover and 104 woodblock printed pages. The binding is also hand sewn. The exact date of the edition is unknown. 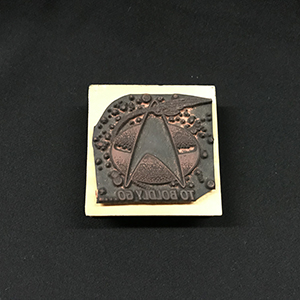 Block-printing is the technique of printing images, patterns, and text onto paper or cloth by stamping, rubbing, or pressing cloth or paper against a carved and inked wooden block. The woodblock is prepared by carving its surface to leave the desired print in raised relief. This relief image, pattern, or text must be carved in reverse (“mirror-image”), so that when ink is applied to the raised relief, and paper or cloth pressed against it, the ink imprint left behind on the paper or cloth appears the correct way around. The carving of woodblock reliefs is called xylography. The oldest surviving woodblock-printed material is silk printed with flowers in three colours from the Han dynasty (c.AD 220). The oldest surviving woodblock-printed text is a Tang dynasty dharana sutra printed on hemp paper (AD 650-670). Notice that on the ink block stamp shown in this display the image and text are cut in reverse and in relief.

Woodblock printing enabled Asia to mass-produce books cheaply in quantities never seen before. From the 4th to the 15th centuries AD China dominated book production, and its imperial libraries dwarfed the collections of Europe and the Islamic world until the introduction of the Gutenberg Press. Despite the relatively early invention of moveable type in Asia, woodblock printing continued to prevail, partly due to the enormous number of characters required by Asian languages which made moveable type less attractive, and partly because woodblocks enforced the accurate replication of ritual texts, whereas moveable type was prone to introducing different typographical errors every time a new typesetting was compiled. Woodblock printing remained the dominant method of printing in Asia until the 19th century AD. 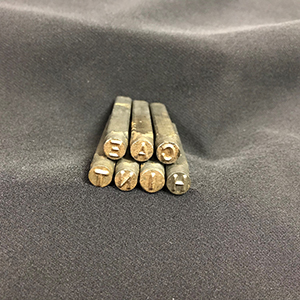 Moveable type refers to the movable components used in the printing process, especially the alphanumeric characters, punctuation marks, and spacers rearranged on a printing plate for printing onto paper. Moveable type was invented in China and Korea and industrialised in Europe.

In the reign of Chingli (AD 1041-1048), the artisan Bì Shēng (AD 990-1051) created moveable type in both wood and clay. His wooden moveable type was abandoned in favour of the clay because woodgrains in the type interfered with the even application of ink when printing.  In 1298, the Yuan dynasty official Wang Zhen invented a wooden moveable type that was more even and durable. Using 30,000 wooden types, he printed 100 copies of the book ‘Records of Jingde County.’ Over time, however, the faces of the wooden characters became worn and had to be replaced. Wooden moveable type continued to be used in China until at least 1733. The oldest known surviving work printed using wooden moveable type is the ‘Auspicious Tantra of All-Reaching Union,’ a nine volume Buddhist text printed in Western Xia (AD 1038-1227) using Tangut script.

In c.1439, Johannes Gutenberg, a goldsmith of Mainz, developed a technique for casting metal moveable type using an alloy of antimony, lead, and tin from hand moulds. The metal type he produced proved remarkably consistent and durable. By this means Gutenberg was able to create cheap copies of letter-punches is vast quantities. Where the artisans of Wang Zhen’s workshop had produced 60,000 wooden types in two years, one artisan in Gutenberg’s workshop could produce 5,000 metal types a day. In addition to the new metal moveable type, Gutenberg created an oil-based ink which was suitable for metal typeface and adhered well to paper, drying quickly and cleanly. Lastly, Gutenberg took the screw press from the wine press and added it to his printing machine, thereby mechanising the printing process. Metal-alloy moveable type, oil-based ink, and the wine press screw created a printing press capable of producing 250 printed sheets per hour. Combined with the relatively small number of characters used in most European alphabets, Gutenberg’s moveable type and printing press sparked a revolution in the mass production of printed texts in the West. 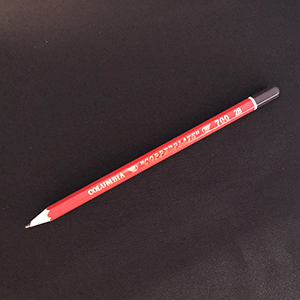 The name “lead pencil” is a misnomer. The solid pigment core of most lead pencils is in fact a stick of graphite. Graphite came to be used as a writing implement following the discovery in 1564 of a large graphite deposit in Cumbria, England. At the time, the graphite found was mistaken for a form of lead and given the name plumbago (“lead-ore”). As the graphite sticks produced from this deposit were both brittle and soft, they were wrapped in string for use, but later they were inserted into wooden sleeves to which they were bonded. The first mass produced pencils were made in Nuremberg, Germany in 1662. Later, mechanical pencil casings, - not bonded to their graphite cores and capable of accepting core refills, were created. The Columbia Copperplate pencil on display here is the first lead pencil to be mass produced in Australia. 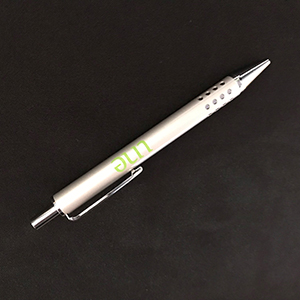 Ballpoint pens consist of a nib with a freely rotating metal ball housed in a socket that is connected to an ink reservoir. The metal ball is usually made of brass, steel, or tungsten carbide. The pen dispenses ink over the metal ball at a steady flow rate. Most ballpoint pens rely on gravity to achieve this and cannot be used upside down. Ballpoint space pens, however, employ a more viscous ink paired with a pressurised ink reservoir to force the ink to the ballpoint. Ballpoint pen ink is normally a paste of 25 to 40 percent dye suspended in an oil solvent that is resistant to water once it has dried. Rollerball pens, in contrast, use water-based inks that have a more fluid ink flow, but which remain wet for longer and are therefore more prone to smearing. The first patent for a ballpoint pen was issued to John Loud in 1888 but allowed to lapse. In 1938 Hungarian-Argentine newspaperman László Bíró and his brother developed a viscous printers ink formula for use in a new ball and socket pen design that proved popular and provided the impetus for the Biro pen industry. The ballpoint in this display is a UNE branded retractable ballpoint pen, which uses a click-spring mechanism to extend and retract the ballpoint from the pen’s casing.