How can the Careers Team support you?

Careers is just one of many services provided by the university to its students. Our staff members are available to assist students throughout their time at UNE, from day one through to transition from study into graduate employment.

The team can assist with the following:

Take charge of your own career development.

Login to the UNE Careers Toolkit using your UNE username (eg. jblogs3) and password to gain access to:

Email the careers team for all your careers questions

Please send an email through to: careers@une.edu.au We will return your enquiry as soon as possible.

Don't forget that if you need advice, you can review our resources in the UNE Careers Toolkit, (login using your UNE username and password).

Careers can help employers by:

To advertise a job opportunity or other relevant information on our LinkedIn page is free (excluding recruitment agencies - see below).

What is a Graduate Program?

Graduate positions are structured professional development roles designed specifically for new or recent graduates. You typically commence a graduate role directly after completing your final year of study; most programs require completion of your degree within the previous two years to be eligible to apply.

The benefits of a graduate program include a supportive environment, an opportunity to work in a number of different roles during a rotational schedule, on-the-job training and mentoring, and an emphasis on learning and development. Programs generally range in length from one to three years, and may include rotational or fixed roles within a specific department.

Graduate roles carry entry level responsibilities. But you should also expect to manage important projects and play a significant role within your department or team. Whether you are part of a large program of 50 or more graduates, or are the only graduate in your organisation, you’ll develop valuable skills to carry throughout your career. You’ll be challenged and have to think on your feet in a range of professional environments.

When do I start applying?

If you are in your final year of study, don’t leave it until November to think about career options!
Most employers recruit for their graduate programs from as early as February in the year prior to graduates starting employment. The sooner you arm yourself with all the relevant information the better placed you’ll be to land a great graduate job! I have been studying BA, majoring in Criminology at UNE. I decided to select WORK300 for my last unit to gain some practical experience before finding employment. There was a few fields I was interested in with my degree and one of these was working with offenders for either pre/post release case management. However, I was not sure if I would enjoy working within a correctional environment. I decided to secure work placement within this field, as it would only be 120 hours. I was fortunate enough to secure an appointment with Maitland Community Corrections where the manager was happy for me to complete placement at this centre. Work experience was fabulous!! I decided to complete the placement working full time for three-four weeks till I reached the required time of 120 hours. That way I got to experience day-to-day activities . At the end of placement, the manager gave excellent feedback. The manager advised he would keep my number and call when he could offer me something.  As the employment is a government position, I would also need to look for positions advertised on nsw.jobs.gov.au and apply through the proper HR process to secure a place on the talent pool.  Once that process is completed, the individual centres can offer long contracts.

Approximately a month later, I received a call from another community corrections centre advising that my number was passed on to her from Maitland Community Corrections recommending me highly for any positions.   Mandy was calling to offer me a position that would work with both custody and community case management.  I accepted a contract with NSW Justice for a 35 hour a week working in the parole unit at St Heliers Correctional Centre for an indefinite position. Within three days of starting, I was confidently interviewing offenders on my own. 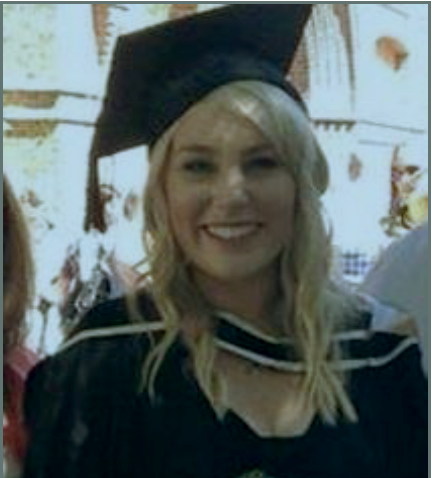 I was actually going to choose Southern Cross University. I got into their Star Entry Scheme but I also got into UNE’s Early Entry Scheme. I thought I would go on a campus tour of UNE, I wanted to move further away from home Grafton than just Lismore or Coffs Harbour. It was freezing cold. My tour was the day after Australia Day, so the 27th January and it was so cold and miserable, but I really liked the campus. On the day of my campus tour, I decided I was going to go to UNE. I decided I would do the Bachelor of Media and Communications. I thought this would give me good career options and I had the idea of being an On Screen News Presenter.

In my second year of college I got Resident Fellow at Mary White College, so I was responsible for pastoral care, but I also got Social Coordinator on the Junior Common Room Committee. So not only was I responsible for looking after the students’ pastoral care but also organising all social events for the college.  One of the advantages with being a Resident Fellow, I got 60% of my college fees.  After a while I stopped being the Social Coordinator as it was getting a bit too much. I then went on to volunteer for the university radio, tUNEfm. I read the news and I got the opportunity to go to Melbourne for a conference. I listened to Ita Buttrose speak and I learnt a lot about getting along with different people. Not long after, I was in a lecture where my friend gave me a newspaper clipping for a casual position in the Future Student Team, as part of Marketing and Public Affairs at UNE and she suggested I apply. I got the job and worked it around study and my commitments with college. I am now working in the Marketing and Public Affairs Department at the University of New England. I am a full time permanent member of staff. My role is as a School Liaison Officer, I speak to about 3,000 to 4,000 year 12 students each year as well as year 10 students. The main objective of my role is to recruit students to come to university. As a requirement of the course for the Bachelor of Urban and Regional Planning you had to do 12 weeks of placement. I did mine at the Department of Planning and Environment. I did the placement right at the end of my degree in the Parramatta Office in Sydney. I would later come back to the Department which is where I currently work.

Once finishing uni, I moved to Sydney. I didn’t get a job straight away in planning. I had a few part-time jobs in different roles. After a month or two of being in Sydney, I got a job in North Sydney as a planning consultant in private practice. They were a medium size consultancy firm and they did big landscaping architecture. They had an office in North Sydney and they had office in China. They were small in Sydney but they were bigger in other areas. I was fortunate to get an interview and got given a go out of that. It took about 10 months to find a role. I then moved on and got a job in the Department of Planning and Environment, where I am now.

I suggest to keep your options open as much as you can and explore all opportunities that come your way. You should never close off any opportunities and think that you have to follow a plan where x takes you to y. If you keep an open mind, you’ll be amazed at what may come out of it. That attitude has paid off for me and better things have happened than what my original plans were.

The other piece of advice I have is when it comes to pracs. You should try and do them earlier in your degree if you can. That way you’ll find out if you like an industry well before you’ve committed to nearly finishing your degree and if you do find that industry isn’t for you nice and early, then you can try to move units across to another degree so you aren’t raking up a big HECS debt.

Careers can help UNE staff with:

All enquiries can be directed to Careers on Ext 2000 or careers@une.edu.au.

Julia’s passion is empowering students and individuals to become the best individuals they can be and see them shine on their path to a prosperous career. Julia was the pioneer of creating the UNE Careers Online Moodle site (many universities outsource such a site). Julia recognised the benefits of having a dedicated career Moodle site just for UNE students. If you haven’t visited the Careers Online Moodle site, you should! You can find it by going to myUNE, click on My Study and scroll down to “Other Moodle Sites” – from there click on the Careers Online Moodle icon. You’ll find a plethora of modules and information on where you can take your studies.

Sally comes to UNE Careers with a wealth of student support experience, having worked in various Schools across campus.

Sally is enthused about empowering students with careers information to make positive decisions on their future. She will work with you on your applications, resumes and graduate employment opportunities. You can contact her via the careers@une.edu.au email with your drafts.