The lasting impact of college life is most often stated to be the establishment of lifelong friendships. At the heart of this legacy is an organised, engaging and varied social life. We actively organise and manage a social program to provide opportunity to form strong community and personal connections.

Throughout the year, from O-week to academic year end, there will be a social event almost every week (except during exam curfew!!). These events help break the study routine and provide the chance to relax with friends. Regular events range from casual nights out in town to themed parties.

Robb College Ball is an annual black tie event held in the third term of each year.

Parents' Weekend, held on the Mother's Day weekend each year,continues to gain in popularity and is a great fund raising opportunity for the College and the College Foundation.

Charity Long Lunch, our annual long lunch is normally held in Mary/April. A beautiful chance to come together with friends and students past and present for a great cause.

Formal and semi-formal dinners are also a significant feature of the College calendar. These celebrate the academic, sporting and community achievements of the College and its residents. Functions such as the Vice-Chancellor's Dinner, and Rural Focus dinners provide an opportunity for residents to hear from guest speakers on topics of special interest or to hear from illustrious alumni returning to the College. The Robb Academic Dinner is a formal event that occurs early in the year and is used as an opportunity to showcase the academic achievement of our students over the last year. We award scholarships and prizes to many excelling in their fields.

Life in the colleges

We love all sports — from social touch footy on our front lawns to the A-Grade competitions of a range of sports, Robb College loves to get in and have a go, and everyone is encouraged to be involved, no matter what your skill level.

Each year we compete in the annual inter-college competition: for the President's Trophy (for men) and Mary Bagnall Trophy (for women). This competition ranges across many different sports. 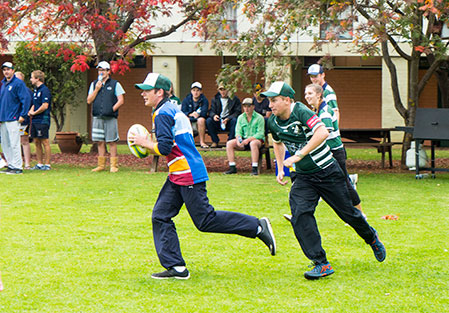 There are also mass-participation events: the run-swim, swimming and cross-country where participation is even more important than expertise.

Robb College is extremely proud of its rugby tradition of more than 50 years. It is the oldest current club in the New England competition, and fields a side in all grades.

Some of our teams

Each year we have a set of three sports matches between our Robb freshers, and the freshers at St Alberts College.

Sport in the colleges

Robb College celebrates the diverse talents of our residents, and there's a range of activities that encourage your creativity.

Since 1988, an annual Arts and Crafts Exhibition has been held within the College in association with the Parents' Weekend.  The Exhibition organised by a student committee, and it's an opportunity for students to showcase their artistic ability and a chance for local and interested artists to display their work.  The Max Wester award is given for the best Robb student artwork.

The Inter-court Trophy is a foursided contest between the Robb's residential Courts and affiliates.  It's awarded to the team which performs the best in public speaking, debating competitions, gardening and the annual Quiz Night held during Trimester 2.

There's a huge range of inter-college cultural events and competitions at UNE — and Robb College loves to take part. There are great opportunities for showcasing your artistic skills and talents in fields including (but not limited to) painting, writing, music debating, and photography.

We encourage you to get involved!

Each year Robb chooses a charity to raise funds for and support throughout the duration of the college year. The charities chosen are frequently ones that hit close to home for our students and everyone is more than happy to get right behind them. Since we started with this directed charity work, we have been able to raise over $600,000 for these causes.

Since the charity projects began, Robb College has raised over $600,000 for worthy causes.

2020 Charity: Backtrack are a local Armidale dedicated team with a purpose of helping as many young people who are having a hard time as possible. The staff are from a range of careers and backgrounds, including youth work, local businesses and experienced not-for-profit individuals. All united in one passionate cause which is to see kids who are doing it tough receive the support they deserve.

Getting young people to chase their hopes and dreams is part of their mission. Offering trainee ships, and real job experience. One of Robb's most memorable projects occurred in 1981 – the Cape to Cape Run, in conjunction with Armidale Rotary Clubs.  Over 24 days, teams of about 25 Robb students and staff each ran back to Armidale from Cape Tribulation in Far North Queensland and Wilson's Promontory in Victoria.  Approximately $60,000 was raised to establish the Australian Foundation for Disabled Students in what was the International Year of the Disabled Student.  Today, those same funds now total over $270,000 and fund UNE's Support Fund for Students with a Disability.

Burrumbuttock Hay Runners — our charity for 2017

Drought is always a big issue in Australia. In some years we suffer worse than others, and it always hits different parts of the country differently. In 2014 Queensland was experiencing a huge drought and it was only getting worse. It was during this time that Brendan 'Bumpa' Farrell decided to help out farmers in the area by donating hay, and thus, the Burrumbuttock Hay Runners was founded.

Since that date in 2014 they have completed 11 successful hay runs to help drought affected farmers all over NSW and QLD. Their most recent run (in April 2016) saw over 500 volunteers take 258 trucks carrying 406 trailers 1,800km from Burrumbuttock to Ilfracombe. There was over 6 million dollars of hay donated (over 13,500 bales), which went to help 800 farmers feed over 300,000 animals.

It's the mateship through hard circumstances that embodies this organisation. It's these values that makes us so proud to support this company through 2017.

Community life in the colleges In keeping with UNE's approach to academic excellence across all our residential colleges,each Robb first year student is assigned a mentor from their accommodation Court to  help them get settled into their new learning environment at university.

As each trimester reaches the exam period, a noise curfew is enforced to ensure that all students are able to prepare effectively. The Senior Common Room (SCR) is a group of members of University staff, alumni or community members with a strong affiliation to Robb. They give their time to provide assistance and offer expertise to residents in a wide range of areas, providing advice, mentoring and support. You'll see them around at formal dinners, college events, helping out with sporting teams and getting involved where they can in all facets of the college.

Read the letter from the Senior Common Room president. 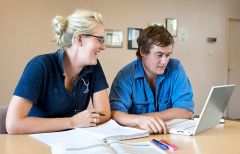 These are weekly sessions run by our Resident Tutor team and returner students to help provide students with a group of people who are doing or have done the same degree or are now working in that industry. These groups help guide you through your current and upcoming academic commitments.

Any students who find they are having difficulty meeting the demands of their study are actively supported with additional assistance and specific guidance from the Head of College.

Often a part of Nerd Nights, these are presentations that focus on topics and assignments you're having difficulty with. Tutorials on essential skills like essay writing, time management and referencing are also run throughout the year.