Our research focuses on pollutants in soils: their processing and cycling, interactions, their effects, managing risks and remediation, with specific interest in comparative arsenic and antimony ecotoxic effects and biogeochemistry.

Microplastic pollution is an emerging issue that has received the attention of scientists and governments worldwide. Since the term was first coined in 2004, research has proliferated in marine environments, where microplastics are widely distributed and found even in remote areas such as the Antarctic, Arctic and the Mariana trench. Preliminary toxicological studies reveal microplastics are ingested and adversely affect a wide range of organisms and body functions. Annual plastics production has reached 348 million tonnes and is expected to increase in coming years. Consequently, it is likely microplastic pollution will continue to accumulate in the environment and thus it is critical to understand the fate, toxicological impact and distribution of microplastics in soil. Polyfluoroalkyl substances are emerging contaminants that are attracting world-wide concern. Here at UNE we are researching the impact of PFAS on a sentinel pollinator, the European honey bee. With a custom made cage system, this research is the first of its kind and has contributed new knowledge on PFAS ecotoxicity and exposure to bee colony studies.

Antimony and Arsenic in the environment

Arsenic (As) is a known carcinogen. Antimony (Sb) is listed as a priority pollutant in several jurisdictions globally. We have one of the largest known environmental dispersions of both anywhere in the world occurring just outside of Armidale.

We are at the forefront of Sb/As research, and have been investigating the causes and effects of this dispersion for over 15 years. We have examined soil chemistry, plant uptake, and ecotoxicology of these elements, and continue to publish internationally on all of these topics. This work came about as a prestigious Australian Antarctic Division grant to examine weed management of Poa annua. We have PhD students on this project who each year travel to the island. One method of weed management is herbicide application. How the herbicides persists and move in the island soils is as yet undetermined. This is what we are trying to understand with the work being extended to weed management on other national park islands. 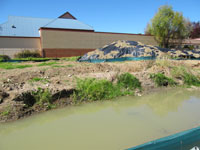 Contamination is as old as human civilization. These ancient legacies still impact agricultural and environmental systems today. We are using new technologies, such as PXRF analysis, to identify locations that were first contaminated up to thousands of years ago, and assessing what risk is currently posed. 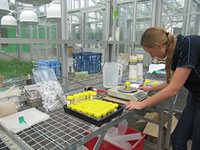 A range of different of organic amendments – MSW compost, biochar, manures – are added to soil to improve fertility. They can, also have the added benefit of reducing pollutant leaching and bioavailability in contaminated soils, but also themselves can introduce pollutant to soils. We have a range of project investigating risk and mitigation with organic amendments and work with industry and policy makers.