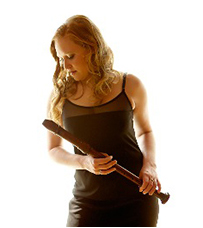 A highly regarded recorder player performing as a soloist and ensemble musician throughout Australia, New Zealand and Europe; Alana has performed with a number of ensembles including The Royal Wind Music, The New Dutch Academy, Salut! Baroque, The Bell Shakespeare Company, Pinchgut Opera, The Sydney Consort, The Tall Poppeas and The Sydneian Bach Choir. As a soloist, she has performed concerti with The Early Music Ensemble of the Sydney Conservatorium, The Manly-Warringah Symphony Orchestra, Coro Innominata and The Bourbaki Ensemble; she has also teamed up with other Australian artists Rosalind Halton (Harpsichord), Riley Lee (Shakuhachi), Neal Peres da Costa & Daniel Yeadon (continuo), Ben Carey (sound technologist), and commissioned a number of composers, exploring the use of recorders and electronics in performance. A graduate of both Sydney and Amsterdam Conservatories, she performs both early and contemporary music, and has performed in some of the world's greatest recital and concert halls including; the Sydney Opera House, Wigmore Hall (UK), Amsterdam Concertgebouw (NL), and Konzerthaus Berlin (GR), appeared on six CDs, and performed live on radio broadcast in Australia, New Zealand, Germany and The Netherlands.

In addition to performance, Alana combines arts management with creative practice, investigating the internal and external influences on artist careers and ensembles.

Blackburn, A. (2016, July). The role repertoire choice has in shaping the identity and functionality of a chamber music ensemble. Proceedings of the International Conference on Music Perception and Cognition. (pp. 583-587), San Francisco, CA, USA.