Dixson Library is at the heart of the UNE campus and provides a venue for changing exhibitions of selections from the University's Collections. It is just a short walk to Booloominbah, the Museum of Anitiquities and UNE's Natural History Museum. UNE Collections displays are also featured at other on- and off-campus venues.

Shield the Prize - Protect the Vision

In recognition of NAIDOC Week 2019, Dixson Library at the University of New England installed a series of powerful sculptures by Michael Brogan. Wrought from black irrigation hose, these striking shields grace the central staircase and front entrance of the Library.

Michael Brogan is a prominent art practitioner and arts educator, who is currently undertaking his PhD at the University of New England. Through his art, Brogan deals with the broader issues of alienation, personal narrative and social history, and explores many diverse and relevant avenues of contemporary visual dialogue.

These works have become the extension of an ongoing dialogue I have orchestrated between the self and an invisible art audience. This particular body of work is constantly in transition … returning to the nature of things. These poly pipe sculpture pieces have been undergoing a transition of their own. From shield motifs morphing into organic augmentations that appear like oceanic life forms you might encounter washed up on the shoreline after the tide has gone out. Leaving the art object high and dry! 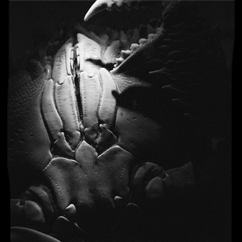 Out of the Dark

Animalia Obscura is an installation of images taken by photographer Jonathon Clay (UNE Lab Technician by day) that shares his response to the rows and rows of preserved specimens tucked away in the UNE Natural History Museum’s collection storeroom.

Clay’s images showcase the weird and wonderful specimens within the collection. Shining a focused beam of light, Clay narrows our gaze to only a handful of creatures amongst the vast array of material held by the University for the academic pursuit of science. Aesthetically, this material offers so much more. Who can resist the deep mysterious appeal of the preserved Spanner Crab Ranina ranina or the distant and contemplative stare of the taxidermied Rhesus Macaque Macaca mullatta? Allow yourself to be drawn into how Clay sees the specimens on the shelf. 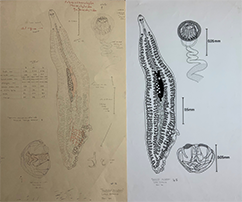 The drawings of Professor Klaus Rohde
& his research group

The drawings exhibited here were made as part of an extensive study of the parasite fauna of marine fishes along the Australian East Coast in surface and deep waters in the early 1980’s. At this time very little was known about parasites of Australian marine animals. As a first step, parasites had to be collected and described from as many host species as possible. Ectoparasites were collected from the gills and body surface, endoparasites from the intestine, various organs and tissues. Most parasites are very small and have to be examined under the light microscope. They must be stained and drawn with a camera lucida, measured and compared with similar species already known. Our studies considered major groups of ectoparasites but focused particularly on the monogeneans.

A tiny, new human species discovered in 2003 at Liang Bua cave on the island of Flores by UNE researchers, their Indonesian counterparts and local Mangarri people. See the sculpture re-creation depicting what the 'Hobbit' might have looked like.