Published 07 October 2020
Palaeontologists have discovered remarkable evidence of the sensory capabilities in the fossilised skin of a 155-million-year-old carnivorous dinosaur. 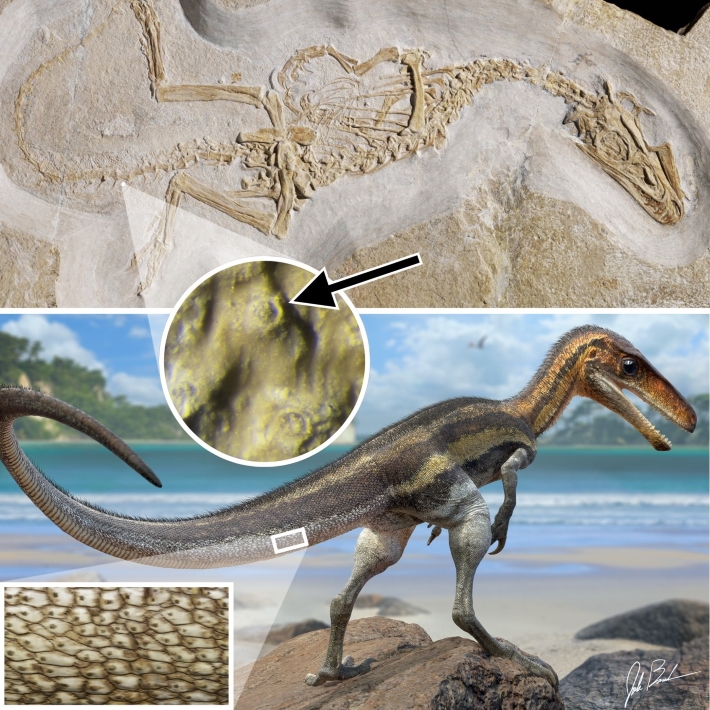 Image: Fossil and life reconstruction of Juravenator, a small carnivorous dinosaur from the Jurassic of Germany. The arrow points to the sensory organ, which are found on polygonal scales covering the lower part of the tail. Reconstruction by Jake Baardse.

The juvenile dinosaur, named Juravenator, comes from the Jurassic of Germany and is perfectly preserved from nose to tail, including remains of its scaly skin and other soft tissues.

Dr Phil Bell, from the Palaeoscience Research Centre at the University of New England in Armidale, Australia, is a leading researcher in the study of dinosaur skin.

“Few people pay much attention to dinosaur skin, because it is assumed that they are just big, scaly reptiles,” he said. “But when I looked closely at the scales on the side of the tail, I kept finding these little ring-like features that didn’t make sense; they were certainly unlike other dinosaur scales”.

The researchers found that the ring-like features were very similar to special sensory nodes found on the scales of modern crocodiles. These nodes, called integumentary sense organs (ISOs), are responsive to touch, chemistry, and temperature information, providing crocodiles with important sensory from their surroundings.

Dinosaur specialist Dr. Christophe Hendrickx, from the Unidad Ejecutora Lillo in San Miguel de Tucumán, Argentina, who co-authored the study points out, “very little in known about dinosaur sensory organs. Sensory scales were recently assumed to be present on the snout of tyrannosaurs like T. rex based on the texture of their facial bones, but this is the first direct evidence of their presence in a dinosaur.”

Because crocodiles are aquatic predators, the researchers also speculated that Juravenator too might have hunted fish and other aquatic animals. Whereas alligators only have ISOs on the face, crocodiles have ISOs all over the body, including the tail. Although the skin on other parts of the body of Juravenator is unknown, it may have submerged its tail to detect the movement of prey underwater.

The study was published in the journal Current Biology.