Published 11 September 2019
New analysis of the jaws of Australia's extinct Ice-Age short-faced kangaroos suggests that the eating habits of these massively-built creatures had more in common with the giant panda than today's kangaroos. 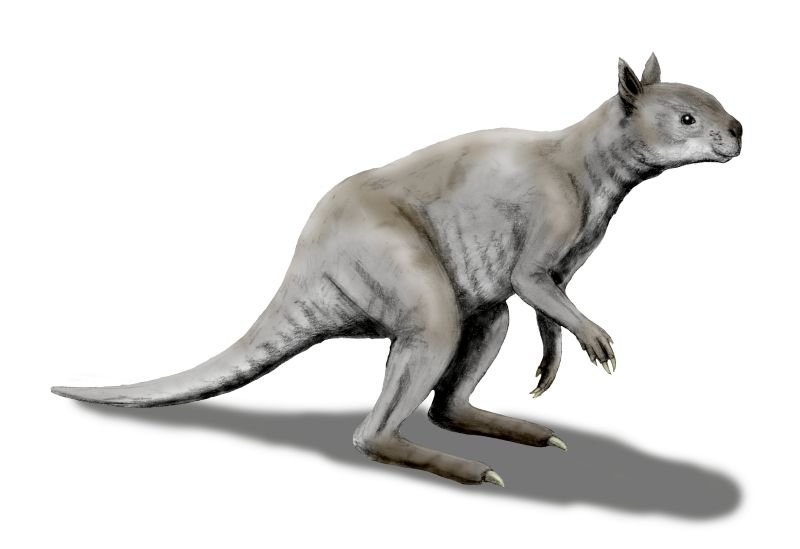 New research has revealed that Australia's extinct short-faced kangaroos were a marsupial version of the giant panda, with jaws adapted to browsing woody, poor-quality vegetation.

The short-faced kangaroos of Ice Age Australia were massively thickset – the largest species would have weighed more than 220 kg – and had large heads shaped like a koala’s.

A new study by Dr Rex Mitchell, a researcher with Australia's University of New England (UNE) and the University of Arkansas, has established that the skull of one species in particular was geared for high-performance crushing of foods. This adaptation would have been useful for survival in low-productivity landscapes.

"Some species of these extinct kangaroos had massive skulls, with enormous cheek bones and wide foreheads," Dr Mitchell said.
"All this bone would have taken a lot of energy to produce and maintain, so it follows that it wouldn’t have evolved unless they really needed it to bite hard into at least some more resistant foods that were important in their diets."

Dr Mitchell created three-dimensional models generated from scans of a well-represented species of short-faced kangaroo, Simosthenurus occidentalis, a species that is estimated to have grown to 120 kg and persisted until about 42,000 years ago. Bite simulations were performed on the models to examine biomechanical performance and the results compared with a koala, a species from today with a similar skull shape.

He arrived at his analogy with the giant panda after finding that, based on skeletal structure alone, the short-faced kangaroo models appeared vulnerable to a much higher risk of injury than koala models during biting with the back teeth. However, Dr Mitchell established that this risk would be greatly reduced if a muscle located on the inner surface of the kangaroo's immense cheek bones was enlarged.

It would appear no coincidence that this muscle is also enlarged in the giant panda, another similarly sized animal that feeds on thick, resistant vegetation (bamboo).

He also found that the short-faced kangaroo model could withstand twisting of the skull much more effectively than the koala during hard biting on one side of the mouth.

This supports previous suggestions that the toughest, thickest vegetation that it could have eaten, such as the woody twigs and branches of trees and shrubs, may have been fed directly to its premolars and molars to be crushed or otherwise broken apart. Such actions would appear similar to how giant pandas crush bamboo.

Dr Mitchell's findings support the hypothesis that at least some short-faced kangaroos were hardy survivors of Australia's brutal Ice Age climate, capable of persisting on thick and woody, poor-quality vegetation at times of low productivity, such as droughts and periods of intense glaciation.

Citation: Mitchell, D. R. (2019). The anatomy of a crushing bite: the specialised cranial mechanics of a giant extinct kangaroo. PLOS ONE