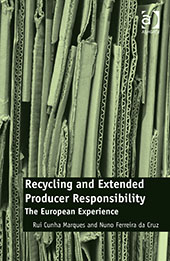 An overriding value of European legislation on waste management is the Extended Producer Responsibility (EPR) principle. For example, all economic operators placing packaging onto the EU market are responsible for its proper management and recovery. However, in general, the collection and treatment of urban waste is the responsibility of local authorities. It has therefore been necessary to establish a system of financial compensations between producers and waste management operators.

Analysing the legal and institutional schemes of several member states and accounting for all the costs and benefits to their local authorities due to selective collection and sorting, this book provides an accurate illustration of how the EPR principle has be translated into practice. Firstly the authors examine whether the industry is paying for the net financial cost of 'preparation for recycling' activities or if the extra-costs of recycling are being recovered via the sale of sorted materials, by the consumer through higher prices or by citizens in general through higher taxes. Secondly, by monetizing the net environmental benefits attained with the recycling system, the book discusses the success and Value-for-Money (VfM) of the EU’s recycling policy. In other words: what is the economic rate of return of the enhanced environmental protection achieved due to the fulfilment of recovery and recycling targets?

Divided we Fall: An Insider's Perspective on Local Government Amalgamations

This book examines council amalgamations across Australia since the early 1990s and uncovers the case of council amalgamation in the NSW Clarence Valley Council (CVC) since 2004. The case of forced amalgamation of four general-purpose and two county councils could have been a recipe for chaos; instead this book describes the gains and the challenges. Writing from deep seated knowledge of local government this book details the net positive economic outcomes and financial benefits against measurable indicators and describes the impacts on local democracy. Based on detailed research, this long term local government 'insider' perspective will be of value to all those interested in driving change through local government reform.

The relentless financial pressure faced by Australian local government has resulted in an infrastructure backlog which far exceeds the fiscal capacity of most councils. Relieving this pressure by forced mergers has been a popular but failed policy and other avenues must now be pursued. Funding the Future represents a pioneering attempt to comprehensively explore and assess the options.The authors focus on Australian fiscal federalism and the place of local government in this structure, and on 'holistic sustainability' as distinct from the narrower 'financial sustainability'. They make a detailed assessment of different approaches to local infrastructure funding, including an Australian municipal bond market, a Commonwealth local infrastructure fund, municipal banking and an Australian municipal bond bank. While the emphasis falls squarely on Australian local government, Funding the Future draws extensively on both the international conceptual and empirical literature.

Australian local government finds itself operating under conditions of acute financial austerity, manifested most plainly in a burgeoning infrastructure backlog. Various policy measures have been adopted to relieve this financial distress, most notably recent structural reform programs centred on forced council amalgamation. However, compulsory consolidation has not only failed to achieve its intended aims, but it has also served to diminish 'local voice' and 'local choice' and left a lasting legacy of bitterness and division.

Drawing on the full weight of international and Australian literature, Councils in Cooperation evaluates the theoretical literature on shared services and advances a new conceptual framework for explaining the comparative performance of shared service programs in practice. The authors consider alternative models of shared service provision and investigate the relative merits of these models. The book then systematically assesses the global empirical evidence on shared services and explores successful – and failed – attempts at shared services in the Australian milieu, providing various case studies of Regional Organisations of Councils, Strategic Alliances as well as vertical and horizontal shared service arrangements in contexts as varied as Greater Western Sydney, the NSW Central Tablelands and Riverina, and Outback Queensland.

The policy implications arising from this wealth of material are examined in depth in Councils in Cooperation. The authors present a cogent case for policy makers to encourage local authorities to pursue shared service arrangements in selected areas of policy provision so as to reap the benefits which can flow from larger scale and greater specialisation, rather than rely on the heavy-handed and blunt instrument of forced amalgamation. Moreover, heightened cooperation between councils may well foster a 'bottom-up' revival of regional development with much better prospects for success than the current pattern of 'top-down' regionalism simply imposed on regional communities by national and state governments.

The Theory and Practice of Local Government Reform

This book explores the entire spectrum of local government reform and focuses specifically on the question of structural reform in local government. It presents new theoretical models in an area largely lacking in analytical foundations and assesses the validity of these models against recent structural developments.

Reform and Leadership in the Public Sector. A Political Economy Approach

The authors provide a fresh and accessible multi-disciplinary perspective on public management reform in this study. The work includes a broad survey of the paradigms and patterns that have shaped and differentiated the reform process in different countries.

The book focuses on two themes not usually considered together. First, the scope and limits of the role economists have played in reform processes, not simply in terms of providing analytical models but in the actual leadership required to advance reform coherently. Secondly, the authors examine the importance of developing leadership at all levels of the public sector to take advantage of the opportunities reforms have generated, and to create new sources of public value. In bringing these themes together they uniquely show how the family of economic theories (public choice, agency theory and new institutional economics) can be adapted to explain why there might be a demand for developing public sector leadership that reflects an 'appreciative' managerial style as opposed to the hard-edged contractualism often associated with public management reform.

The increasing complexities of Australian local government place onerous demands on municipal managers and oblige them to continually upgrade their skills. This book examines the economic environment of contemporary local governance.

The Political Economy of the Voluntary Sector: A Reappraisal of the Comparative Institutional Advantage of Voluntary Organisations

This book provides a superb review of the literature on nonprofit organisations and extends the boundaries of our knowledge in a substantial and novel way. In particular, Dollery and Wallis provide a seminal analysis of public policy alternatives on the voluntary sector. The book represents a "must read" for all scholars, practitioners, students and policymakers interested in nonprofit organisations.

A study of local government policy formulation, drawing on developments in economics - such as new institutional economics - and advances in the theories of social capital and leadership. The authors also examine rival minimalist and activist approaches to local government reform.

A global wave of reform is fundamentally reshaping the role of the state in national economies. This book provides a fresh and accessible perspective on the political economy of this megatrend. It traces the theoretical roots of the reforms to developments in public economics which emphasize problems of government rather than market failure. It then breaks new ground in developing an economic theory of leadership to explain how policy leadership networks can strive to influence the direction of reform processes.

This book discusses most critical and topical issues affecting local government. The book as a whole, and each chapter within it, takes a national perspective. Though the major focus of different chapters may be on one or two States, developments across Australia are also examined. Authors provide a brief historical context of their topic, a description of the scope and substance of the reforms, and an evaluation of the impact that the changes have had. The collection is comprehensive in scope and covers the related areas of management, politics and policy. The book is designed to appeal to practitioners as well as academics and students.

Witherby, A., Dollery, B. E., Marshall, N. A. and Auster, M. Is Bigger Better? Towards a Model Process for Local Government Structural Reform, Sydney, Australian Institute of Urban Studies, 1999, 65.