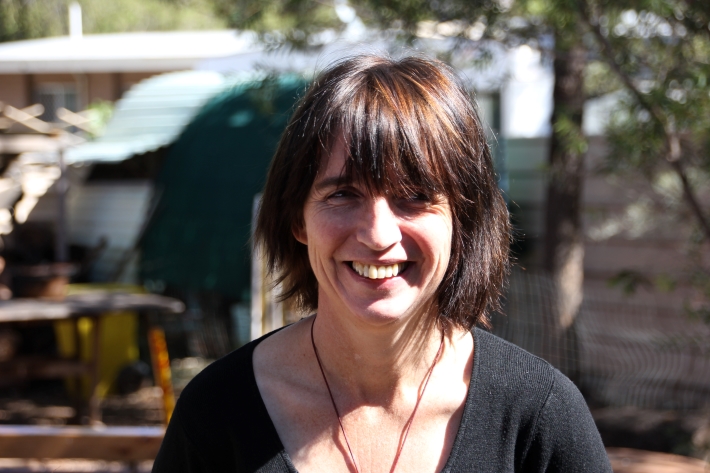 Dismayed by the high kidney disease mortality rates, dislocation of families during haemodialysis treatment, and lack of government support, the Pintupi-Luritja people took matters into their own hands 20 years ago.

"The survival rates on dialysis were some of the worst in the country," says former bush nurse and University of New England alumnus Sarah Brown, who was enlisted to help. "People were living in poverty but had really clear ideas about who they were and what they wanted for their families and their future. Many had been forced off their country to missions and government settlements, had fought really hard to return, but were now being forced off their land again if they wanted to survive kidney disease. It was tearing families and communities apart."

The resulting Purple House – the paint colour chosen by the first person to go home to Kintore on dialysis in 2004, Amy Nampitjinpa  has turned traditional Indigenous health delivery on its head. It recognises the social and cultural determinants of health, and has pioneered an integrated system of care founded on family (Walytja), country (Ngurra) and compassion (Kuunyi).

"For communities to survive, people need to be on country and looking after that country, teaching their kids and grandkids, and taking part in ceremony," says Sarah.

"To receive dialysis treatment (generally three times a week for five hours at a time) patients with end-stage renal failure were having to move hundreds of kilometres from country, often without family support."

Instead of centring dialysis treatment on Alice Springs and Darwin, Indigenous leaders decided they wanted it offered within their remote communities, to overcome the hardship and loneliness that patients experienced. But this was going to cost money, so a team of Papunya Tula artists from Walungurru and Kiwirrikurra collaborated to produce four extraordinary paintings, which were auctioned at the Art Gallery of NSW in 2000. The proceeds (over $1 million) were enough to launch the Western Desert Nganampa Walytja Palyantjaku Tjutaku Aboriginal Corporation, now known as the Purple House.

Today, the organisation provides dialysis in 18 remote communities. A mobile dialysis truck also enables patients to maintain their treatment while visiting homelands for cultural business, and support services have opened up in Darwin, Perth, Kalgoorlie and Adelaide. From providing GP support to families and much-needed aged care, it wasn't a big leap to begin delivering school nutrition programs.

"We've gone from the worst survival rates on dialysis in the country to the best," says Sarah, now CEO of the Purple House. "If you visit one of our clinics, you will live longer as a patient on dialysis than if you were a non-Aboriginal person living in Sydney or Melbourne, and that's extraordinary.

"Treating people on country is central to everything we do. Even when families are geographically apart, we try to hold people close, and keep them well so we can get them home again. We're currently providing services for about 250 dialysis patients and their family members."

Almost 18 years at the helm of the "Starship Purple House" has taught Sarah a great deal about persisting healthcare inequities in Australia and what it takes to help close the gap.

"Indigenous people must have agency over their lives; this is so important to their health and wellbeing, and for them to engage with health services," she says. "The programs that work are those that families and communities have control over, that have come from the community itself, and are embedded in culture and language."

Positive ripples from the Purple House approach have spread far and wide. Patients learning about health and nutrition while undergoing treatment share that knowledge within their communities, influence what community shops sell (diabetes and poor diet contribute to kidney disease), how aged care facilities are run and how their children and grandchildren are educated.

But among the Purple House's biggest achievements, in Sarah's view, was convincing the Federal Government to approve Medicare listing for remote dialysis, in late 2018. "That's for the whole of remote Australia, not just for us," she says proudly. "Now we are helping other communities to adopt our model and supporting them to get their family members home, too."

A board of 12 Pintupi-Luritja directors guide the operations of Purple House and its 150 staff. It's a model of "good governance and caring for people" that attracts quality staff, volunteers, philanthropic and government support.

But Purple House members and staff are not resting on their laurels. A social enterprise making bush medicines is "going gangbusters", patients have developed the first ever real-time Aboriginal language translation App, and a second purple truck is about to hit the road.

"And all this from a group of people who had a problem, were told that no-one could help, and came up with their own solution," Sarah says. "Purple House is making a real difference to people's lives and showing an alternate view of humanity."