Published 31 October 2019
Promising new research has found just being in the presence of a horse can have a calming effect on people. 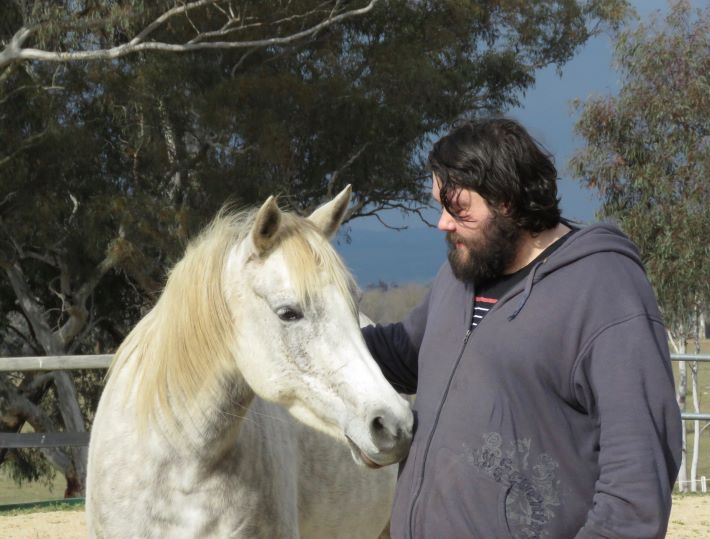 Image: Research has found that equine-assisted psychotherapy has a calming effect on people

The relationship between humans and horses dates back centuries, typically involving utility and sports. Later, horses were valued as therapy animals and used for therapeutic horseback riding to improve the posture of people with disabilities.

Promising research by the University of New England has found just being in the presence of a horse can have a calming effect on people.

Equine-assisted psychotherapy (EAP) is an emerging field based on effects arising from human-horse interactions.

The challenge, according to student in Psychology, Saan Ecker, is the lack of standardisation about EAP’s effective elements, which makes it difficult to draw conclusions.

“The therapeutic value of the natural relationship between animals, such as cats and dogs, and humans are well documented but information on the benefits of conducting therapy in the presence of horses is mostly anecdotal,” Saan said.

Saan, and her supervisor, Associate Professor Amy Lykins, devised a pioneering study to explore how people who hadn’t had any previous experience with horses would react when interacting naturally with them.

She found that almost half of the adults were physiologically calmer in the presence of horses based on heart rate variability (HRV). HRV measures the variation in time between each heartbeat and is a noninvasive measure of whether a person is in parasympathetic (rest and digest) or sympathetic (fight or flight) nervous system.

“In individual experiments, nine adults sat on chairs in a yard where they spent 10 minutes with five different horses who roamed freely in the yard. We compared the HRV measured while in the yard to a pre-exposure baseline and found an improvement in 40% of the test subjects but a deterioration in 23% across 43 ten-minute interactions between humans and horses,” Saan said.

“What is exciting is that the combined results showed a positive effect in HRV across the different phases of the experiment despite the experience being quite varied for different people.”

Saan’s study supports similar findings that show animals have a relaxing effect on people in a therapeutic context. The study also supports findings showing that some people experienced increased anxiety when near horses.

“An interesting finding was that while there were improvements, deteriorations and neutral reactions by participants, not one participant showed both an improvement and a deterioration,” Saan said. “This suggests that individual reactions are consistent and stable. The finding supports the necessity to have a client-focused approach rather than a one-size fits all approach to EAP.

“When you add this finding to the aggregated results, it could mean some people will benefit cumulatively simply from being in the presence of horses.”

Saan also explored how the horses used in the study reacted to being in the presence of people.

“The horses we used in the study were used to people and physically and emotionally healthy. They were free to choose to approach the participants or not.”

“They chose to spend time in close proximity with the people seated in the yard in over 70% of the recorded interactions.”

Saan’s study provides an early insight into the influence horses can have on people by just being in the same proximity and lays the foundation for further studies in the field.

“EAP is a growing field with a limited evidence base. I hope to next explore horses’ willingness to interact with people in-depth as well as the impact of EAP on mindfulness.”

The article "Effects of Short-Term Human-Horse Interactions on Human Heart Rate Variability: A Multiple Single Case Study" (MS #1022) was published in People and Animals: The International Journal of Research and Practice and may be accessed at the following URL: https://docs.lib.purdue.edu/paij/vol2/iss1/2