Published 30 May 2018
With five by-elections, a Federal Government and a NSW Government election looming, Australians will potentially be going to the polls multiple times in coming months. That means driving to a crowd… 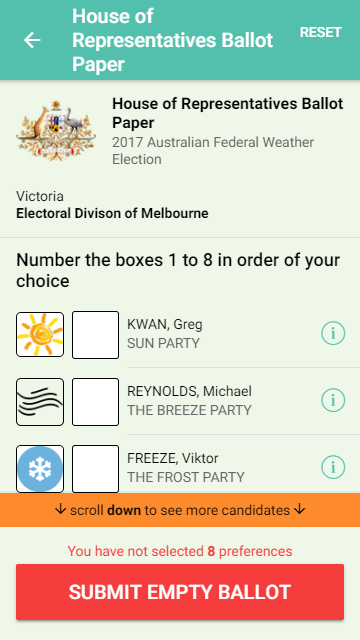 With five by-elections, a Federal Government and a NSW Government election looming, Australians will potentially be going to the polls multiple times in coming months. That means driving to a crowded polling station, securing a park, running the gauntlet of the paper-thrusting electioneers, and then queuing to exercise your democratic right in a cardboard cubicle.

Four years ago, after experiencing just such a scenario with an impatient toddler in tow, University of New England (UNE) researcher Phillip Zada deemed there had to be a better way. Now the PhD-I candidate and software developer thinks he’s developed it – a mobile voting app that offers Australians the convenience of casting their ballot on a smartphone or tablet.

“Mobile technology is increasingly a part of our daily lives,” said Phillip. “Most people have no problem doing their banking on mobile phones these days, so why not voting? I’m not advocating we replace the current paper-based system, but to supplement it to save time and resources.”

Digital voting platforms are being developed and trialled all around the world. The NSW Electoral Commission  gave people (with poor vision, literacy needs, a disability, living more than 20 kilometres distance from a polling place or keen to lodge a pre-postal ballot) the chance to vote online during the last NSW Government election using iVote. Some 250,000 people took up the option.

Phillip, whose app is tailor-made for Australia, said voter support is not the impediment. A survey he conducted in 2015 found that 75% of respondents were in favour of online voting and would use it if it became available. They cited mobility, verifiability and speed as its main advantages. Opponents were concerned mainly about malicious parties tampering with votes and manipulating an election outcome.

But even in the face of the Australian census debacle, alleged Russian interference in the US elections and, more recently, the Cambridge Analytica Facebook privacy scandal, Phillip said he is confident that his prototype is secure, anonymous and efficient.

“It’s inevitable that we will adopt online voting, it’s just a question of when and how,” he said. “If there are security fears, let’s address them, rather than bury our heads in the sand. Let’s mitigate against the risks. My platform has three levels of security and a means of verifying the vote cast. The biggest obstacle to its introduction is not security but the lack of political will.

“I would at least like to give Australian voters the choice between online and traditional voting. It could greatly reduce the environmental and financial costs of an election. It may also encourage people to make more informed choices because my app features an option to bring up information on the person, the party and their policies before you vote.”

An added bonus, Phillip said, is that the platform could be used for national surveys or consultation. “I can see people using this app or a similar app in future to comment on legislation being debated, and to broaden the input that people have into our democratic processes,” he said.

The next stage of Phillip’s research is to conduct interviews to trial the app during a simulated online election and gather feedback. He said the PhD-I has allowed him to combine industry knowledge and practices with academia, enabling him to test his ideas and findings as the research unfolds.

“The PhD-I bridges the gap between academia and the business world,” he said. “I’m using proven academic principles to implement some real solutions while still working in the industry.”