Published 04 April 2018
Pictured above: Finite element models of bite force stress across three human species. Credit: UNE/Wroe   Why the long face? That’s what an international team of researchers set out to an… 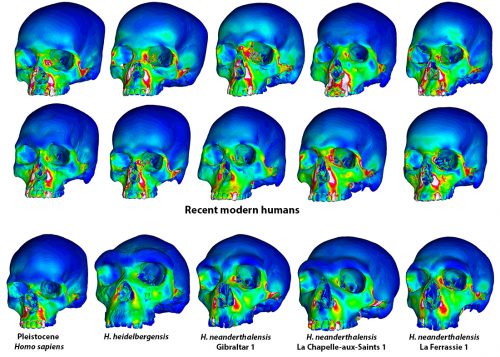 Why the long face?

That’s what an international team of researchers set out to answer about the big-nosed, long-faced Neanderthals, the extinct human species that has been synonymous with “caveman” since the first fossils were found in the 19thCentury.

By making the first full reconstructions of Neanderthal skulls and investigating the natural engineering of those structures using 3-D modelling and computer-based engineering, the team has determined that these robust humans probably expended huge amounts of energy in pursuit of an extremely active lifestyle.

The conclusion was arrived at by carefully discounting a competing theory about Neanderthals having massive bite force, and developing compelling new evidence that their nasal passages were capable of both conditioning and channeling large volumes of air in and out of their lungs. Comparison of air flow through the nasal cavities of Neanderthals and modern humans.

“In this respect, Neanderthal breathing was almost twice as effective as it is in we modern humans,” said the team’s leader, University of New England zoologist Professor Stephen Wroe.

“This means that Neanderthals could get far more oxygen into their system before having to resort to mouth breathing. Breathing through the nose is more efficient than mouth-breathing in terms of energy use.“

“Our conclusion was that the distinctive, projecting Neanderthal face is an adaptation linked with an extreme, high energy lifestyle. It may be because Neanderthals were routinely involved in very strenuous activities, such as running down and killing large animals, or it may simply be that they needed to burn a lot of oxygen just to stay warm in their Ice Age habitats. Or it could be some combination of both.”

In a paper published today in Proceedings B of the Royal Society of London, Professor Wroe’s team detail how they used new methods to examine competing theories about the evolutionary purpose of the Neanderthals’ long face.

They built the first three full model reconstructions of Neanderthal skulls, including the more perishable material of the nasal cavity, which only rarely survives the fossilization process, and compared those skulls with those of modern humans and skull reconstructions of a likely human ancestor, Homo heidelbergensis.

By using mechanical engineering simulations to model the ability of each species to sustain high bite forces, they ruled out a theory that Neanderthal skulls had evolved into their distinctive form to give these ‘archaic’ humans a more powerful bite.

“In fact at least some modern humans are arguably better suited to this role,” Prof. Wroe says, “using less muscle force to achieve the same bite force, while developing less strain in the bone.”

But then the international research team examined the Neanderthals’ big nose – or more specifically, the cavities that lay behind it – using finite-element analysis (FEA)and computational fluid dynamics (CFD), and discovered some profound differences.

The analysis was helpful in showing that although Neanderthals were more effective at warming and humidifying incoming air than the more primitive Homo heidelbergensis, they were not as effective at warming cold air as modern humans – regardless of whether the modern humans were from cold or hot climates. This still means that Neanderthals were better adapted in this respect than their probable ancestor.

But in one respect, Neanderthals were unique. When compared with the more’primitive’, Homo heidelbergensis, and a range of modern humans (for rigour, the analysis covered Inuit and other hunter-gatherer skulls, including a modern human fossil from the Ice Age) the Neanderthals clearly excelled at getting air in and out of their bodies through their noses, fast.

“Neanderthals looked very different to us,” Prof. Wroe says. “They were shorter, far more robust and muscular than your average modern human, and, perhaps most obviously, they had huge noses and long mid-faces. This projecting mid-face is a true Neanderthal novelty, a specialization which sets them apart, not just from us, but from their ancestors too.”

“This characteristic, perhaps more than any other physical feature, separates Neanderthals from us. The evidence suggests that in life, Neanderthals lived very high-energy, extreme existences.” Modelling of a reconstructed Neanderthal skull that allowed analysis of breathing and biting capability.

The finding illuminates an intriguing point of difference between two human species at a time when old ideas about difference are being brought into question by new discoveries.

The 19thCentury discovery of Neanderthal fossils gave rise to the original concept of the primitive caveman: dimwitted, brutish, and inferior to modern humans in every way that mattered.

Prof. Wroe says that a steady sequence of discoveries over recent decades has shown that in our conceit, we’ve been selling Neanderthals short. The caveman’s cultural legacy is very similar to ours.

“It now seems likely that Neanderthals buried their dead and carried a concept of afterlife; their diets and behaviour in general were surprisingly flexible; they used body art such as pigments and beads, and, most recently, it has been suggested that they were the very first artists,” Prof. Wroe says. “Neanderthal symbolic cave art in Spain appears to have predated the earliest modern human art by some 20,000 years.”

“In short, distinguishing between ‘us’ and ‘them’, at least on the basis of cultural behavior and mental ability, is becoming increasingly difficult, and may be impossible.”

But the new study of reconstructed skulls – undertaken by scientists from Australia, the United States, United Kingdom, Germany and Italy – indicates that the living Neanderthals would have been otherwise readily distinguished from our own species not just from the appearance of their long faces, but the physical endurance and behaviour that those long faces and big noses supported.

Unfortunately, Prof. Wroe says, exactly how the Neanderthals used their immense capacity to harvest and expel oxygen is not preserved in the fossil record.

Like so much of early human life, we have to fall back on imagination and wonder what it was like to see Homo neanderthalensisthrough the eyes of Homo sapiens.