Published 19 April 2018
After 79 years, Latin student Robert Hillier has amassed a lifetime of experience. First as a tradesman, then during military service in Vietnam, establishing a hydraulics company, working for BHP and finally as an analyst with the Melbourne Stock Exchange, all while helping to raise five children. 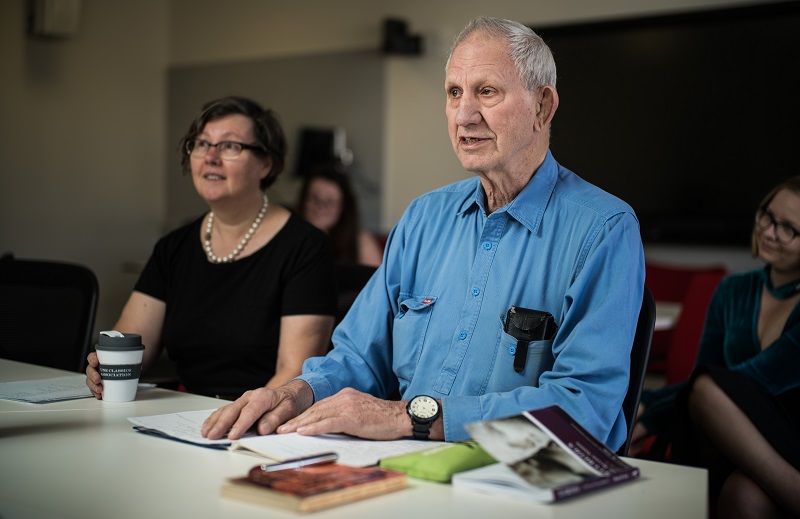 “I’ve seen life from all angles,” said Robert, who has qualifications in computer science and mathematics, and has also studied quantum mechanics and complexity theory.

However, few roles have been as demanding as the one he currently holds – as full-time carer for his second wife Beryl, who has dementia. For the past 15 years, Robert’s devotion to Beryl has confined him largely to their farmhouse in central Victoria, near Castlemaine.  He’s relied on the Internet and online study to bring the world to him.

“I am a bit isolated, so having contact with my fellow Latin students is an important part of my social life,” Robert said. “I have developed some good friends among them. Most are younger than me and it’s a diverse group – lawyers, teachers, psychologists and everyday people – but there’s a sense of shared scholarship, and I feel as though I am part of a community. It’s a means of escaping my daily demands.”

Twice a year Robert also organises respite care for Beryl and makes the journey to UNE’s Armidale campus for intensive schools – a valuable opportunity to engage in person with his class mates and Charles Tesoriero Lecturer in Latin, Dr Sarah Lawrence. He relishes the chance to share his passion for Latin and cheese.

“Language is a shared experience, so the closer interaction is very important,” Robert said.

“Sarah is a very expressive teacher, so it’s wonderful to see her teach in person. I love the academic community and would happily relocate to Armidale, but can’t move my wife away from the support she has here.”

Robert said he enrolled in the Latin course in a bid to help maintain healthy brain function. “Latin underpins many European languages and it appealed to me because of my interest in maths and physics,” he said. “It is quite a mathematical language; they had to say as much as possible as economically as possible.

“I think my study of Latin has improved my memory, and my study of maths and physics. It’s been very stimulating and sharpened my faculties all-round. I hope to do two semesters a year as long as I can. I guess I have some unique experiences and wisdom to bring to the group.”

And that’s not all he brings. “Robert regularly delivers entire rounds of Manchego cheese and home-made quince paste for us to share during intensive schools,” Sarah said. “We have some brilliant discussions. Our time together allows older students like him to draw energy and new ideas from the younger ones, and for the younger ones to benefit from the experience of the older students. Each person brings their unique perspectives to the group and the reading of texts.”

Sarah said Robert’s example is testament to the liberating power of external study. “It gives students the freedom to learn in their own homes, in their own time, regardless of their personal circumstances,” she said. “It’s incredible to think that Robert can interact with fellow students all over Australia on texts that were written on the other side of the world 2,000 years ago.”

For Robert, a commitment to lifelong learning defies distance and age. “I think we need to continue to learn throughout our lives,” he said. “Artificial intelligence will eventually replace a lot of jobs, so people will need to find other useful things to do, and that will only be achieved through learning. Universities will become more and more important and will need to become more adaptable in how they deliver education. These are exciting times to live in.”