Senior Lecturer in Chemistry - School of Science and Technology 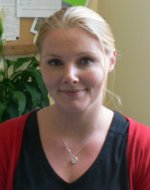 Following a MSci degree in Forensic and Analytical Chemistry, I obtained my PhD from The University of Strathclyde (Glasgow, UK) in 2006 in synthetic inorganic chemistry working with Dr John Reglinski on the development of novel imaging agents for the detection of oxidative stress. I then moved to Australia to take up a 2 year postdoctoral research fellow position in inorganic chemistry at the University of Melbourne with Assoc. Prof. Charles Young, synthesising models for the active sites of  molybdenum enzymes. Following this I joined Prof. Carl Schiesser's research group in the ARC Centre of Excellence for Free Radical Chemistry and Biotechnology at the University of Melbourne in 2008 where my research focussed on the synthesis of fluorescently labelled drugs and profluorescent nitroxide, radical sensing, drug derivatives.

I was appointed as a Lecturer in Chemistry at UNE in 2010.

My research and teaching interests include synthetic inorganic and organic chemistry, specifically the development of imaging agents for oxidative stress and the synthesis of fluorescent and profluorescently labelled drugs.

The design and synthesis of metal complexes for in-vivo detection of inflammatory based diseases.

This project involves the synthesis of a range of macrocyclic ligands containing N-heterocyclic carbenes (NHCs) and their transition metal complexes. Alteration of macrocycle size, donor atoms and substituent groups will be used to control the properties of the complexes, such as the redox potentials and solubility, such that they will become localised in tissues experiencing oxidative stress.

The development of fluorescently labelled analogues of therapeutic compounds used in the treatment of disease.

In collaboration with Chemists and pharmacologists at The University of Melbourne and ARC Centre of excellence for free radical chemistry and biotechnology we are developing fluorescently labelled analogues of drugs used in the treatment of hypertension. These compounds will have numerous applications in furthering our understanding of drug-receptor interactions and receptor localisation and expression, studies that will provide the foundations for the future development of new and improved drugs.

Oxidative stress, which includes free radicals, is implicated in the pathology of a number of important diseases. We are applying technology developed for the detection of free radicals generated during polymer degradation to detect oxidative stress associated with disease. Profluorescent nitroxides consist of a fluorophore covalently linked to a stable nitroxide radical. Nitroxide radicals have two properties which are exploited in this research, their ability to quench fluorescence and their rapid reaction with free radicals.

By attaching a nitroxide to our fluorescently labelled drugs, these compounds become probes in which the fluorescence is 'switched on' in the presence of free radicals allowing us to correlate receptor distribution with oxidative stress.

Member of the Royal Society of Chemistry, Associate Investigator in the ARC Centre of Excellence for Free Radical Chemistry and Biotechnology.