Professor - School of Science and Technology 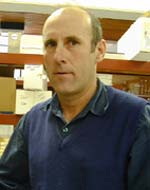 This laboratory is actively researching the role of hormones, growth factors and their binding proteins in the regulation of reproductive and metabolic processes. We are particularly interested in the transforming beta family of proteins and the newly discovered hormone leptin. We also have an active research program on glucose metabolism and the role of traditional medicines in treating type II diabetes mellitus. Our lab is also active in applied and commercial research particularly in the area of horse reproduction and veterinary pharmaceuticals. Dr McFarlane is also the director of the Physiology Analytical Laboratory which is accredited and licensed by the Australian Pesticide and Veterinary Medicine Authority (APVMA) to test and release a range of veterinary pharmaceuticals. Some specific research projects are:

Parturition: Pre term labour is a prevalent problem of pregnancy and places both mother and foetus at considerable risk. It also places a considerable cost burden on our health system. The initial trigger for parturition is unknown. Some of the hormones involved in the pathway are known such as prostaglandins and oxytocin, however it is the steps in the pathway before these that we know little about. Our laboratory has shown that activin increases during pregnancy in rats, and women but not in sheep. This work has, however identified a pulse of activin A is released into the blood stream just prior to parturition in all three species. Is activin the initial trigger for parturition? To answer this question we must now design further experiments to test this hypothesis.

Pregnancy: The retention of developing foetus within the mother, which is dependent on maternal support throughout development, is a remarkable process restricted to mammals. A successful pregnancy requires metabolic support from the mother but is closely regulated by the endocrine system.  The role of hormones such as progesterone during this process has been well studied; however there is increasing evidence that many other hormones and proteins are also important. We have recently isolated a protein (UTMP) secreted by the endometrium during pregnancy that binds activin. The role this protein plays in regulating activin action has yet to be determined.

Leptin Physiology: Leptin was originally identified as a hormone secreted by fat cells and a complete deficiency of this hormone results in morbid obesity, an attenuated immune system and reproductive failure. We have shown that physiological concentrations of leptin are important in early embryonic development leptin and that high concentrations of leptin have a negative impact on reproduction. However the mechanism of this biphasic response remains unknown.

Regulation of Ovulation Rate: The Booroola merino sheep has a mean ovulation rate of 5.8 while that of a normal ewe is 1.2. It has recently been discovered that these sheep have a mutation in the BMPR-IB receptor gene which makes the protein only partially functional. The Garole sheep in India also has this mutation but has an ovulation rate of only 3. This suggests that the UNE Booroola sheep may have other mutations which enhance the ovulation rate. Identifying these other factors may enable the development of tools to manipulate ovulation rate in both women and livestock. We have raised antibodies against BMP-4, BMP-2, BMP-7 and BMPR-1B and are being used to unravel BMP signalling in the ovary and other tissues.

Type II Diabetes Mellitus: A range of traditional medicines are available today or have been described in ancient texts, which may have important implications in the treatment of diabetes. They may also of course have no real therapeutic value.  We have currently identified several of these treatments which holds the promise of a new drug with many advantages over current treatments. We are also interested in understanding the fundamental physiological causes of type II diabetes.

Production of PMSG by Pregnant Mares: PMSG is extracted from the blood of pregnant mare donors and is widely used in livestock industries to manipulate reproductive behaviour and in AI and ET programs. However, the concentration of PMSG in the blood of pregnant mares is highly variable ranging from undetectable to over 200iu/ml. This degree of variation place a substantial cost on the industry. A number of projects could be developed in this area. For example "what is the correlation between stress and PMSG production". Nutrition may also play an important role.

Sharpley C.F., McFarlane J.R and Slominski A.J., Stress-linked cortisol concentrations in hair: What we know and what we need to know, Reviews in Neuroscience 23: 111-121, 2012.