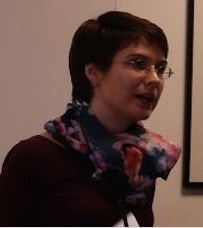 Kim Hajek has an interdisciplinary background spanning French literature, the history of science and medicine, and experimental physics. She studied at The University of Queensland, where she completed a BA (Hons) and a BSc (Hons), both awarded the university medal, and later completed her PhD. Before coming to UNE, Kim worked at UQ undertaking teaching and research in physics, and teaching French. She continues to pursue her interest in teaching French literature, culture, and language at UNE.

Her research focuses on interactions between science and literature in 19th-century France, particularly in the area of the psychological/human sciences. Her current project examines case histories in French psychology c.a. 1870–1914, and explores the relations between textual practices in case-writing, fictional accounts of psychological cases, and knowledge construction in the human sciences. This continues her doctoral research, which investigated reciprocities between scientific and literary forms of enquiry in 19th-century efforts to make hypnotism a science.

Kim M. Hajek, “‘A Portion of Truth’: Demarcating the Boundaries of Scientific Hypnotism in Late Nineteenth-Century France.” Notes and Records (Special issue on the History of Hypnotism) 71, no. 2 (2017): 125–139.

Kim M. Hajek. “Imperceptible Signs: Remnants of magnétisme in Scientific Discourses on Hypnotism in Late Nineteenth-Century France.” Journal of the History of the Behavioral Sciences 51, no. 4 (2015): 366–86.

Awarded the European Society for the History of the Human Sciences Early Career Award, 2014.

Kim M. Hajek. “The Fear of Simulation: Scientific Authority in Late Nineteenth-Century French Disputes over Hypnotism.” History of Science 53, no. 3 (2015): 237–63.

“‘This Story, which has the Style of a Novel, […] is in Reality a Clinical Observation’: Representing Hypnotism between Science and Literature in Late Nineteenth-Century France.” History of Science Society Annual Meeting 2015, San Francisco, 19–22 November 2015.

“The Tension between Scientific and Therapeutic Aspirations in the Nancy-Salpêtrière Disputes over Hypnotism.” Australian and New Zealand Society of the History of Medicine 12th Biennial Conference, Brisbane, 12–15 July 2011.