In the late 1970s, and again in the late 1980s, attempts were made both by independent committees and at Government level to initiate moves towards a treaty, agreement or compact which could represent a formal settlement of the unresolved issues of our past—to put to rest the past not yet dealt with so that we could all move forward together into a better future.

Unfortunately, Australia was not ready for such a formal settlement at those times, and broad agreement could not be reached on various proposals, either in Parliament, the wider community or among Aboriginal and Torres Strait Islander peoples. 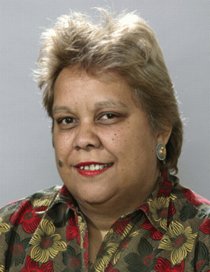 Jackie Huggins is an Indigenous Australian author, historian and Aboriginal rights activist of the Bidjara Central Queensland and Birri-Gubba Juru North Queensland peoples. She is the Deputy Director of the Aboriginal and Torres Strait Islander Studies Unit, an Adjunct Professor in the School of Social Work and Human Services at the University of Queensland and a Spokesperson for Recognise.

Huggins is a former Co-Chair of Reconciliation Australia, the former Chair of the Queensland Domestic Violence Council, and has been a member of the National Council for Aboriginal Reconciliation, the AIATSIS Council, and Co-Commissioner for Queensland for the Inquiry into the Separation of Aboriginal Children. In 2001 she was appointed a Member of the Order of Australia (AM) for her work with Indigenous people, particularly in reconciliation, literacy, women's issues and social justice. In 2007 Huggins was named University of Queensland Alumnus of the Year. She has published a wide range of essays and studies dealing with Indigenous history and identity. She is the author of Sistergirl (University of Queensland Press, 1998), and co-author, with Rita Huggins, of the critically acclaimed biography Auntie Rita (Aboriginal Studies Press, 1994)