The map-making activity is an attempt to introduce the idea of the relationality of Indigenous knowledge, including mathematics. Indigenous Australians had (and still have in many locations) complex knowledge of their environment and how to navigate around it using the stars and geographical features (Fuller et al. 2014; Australian Aboriginal Astronomy n.d.). 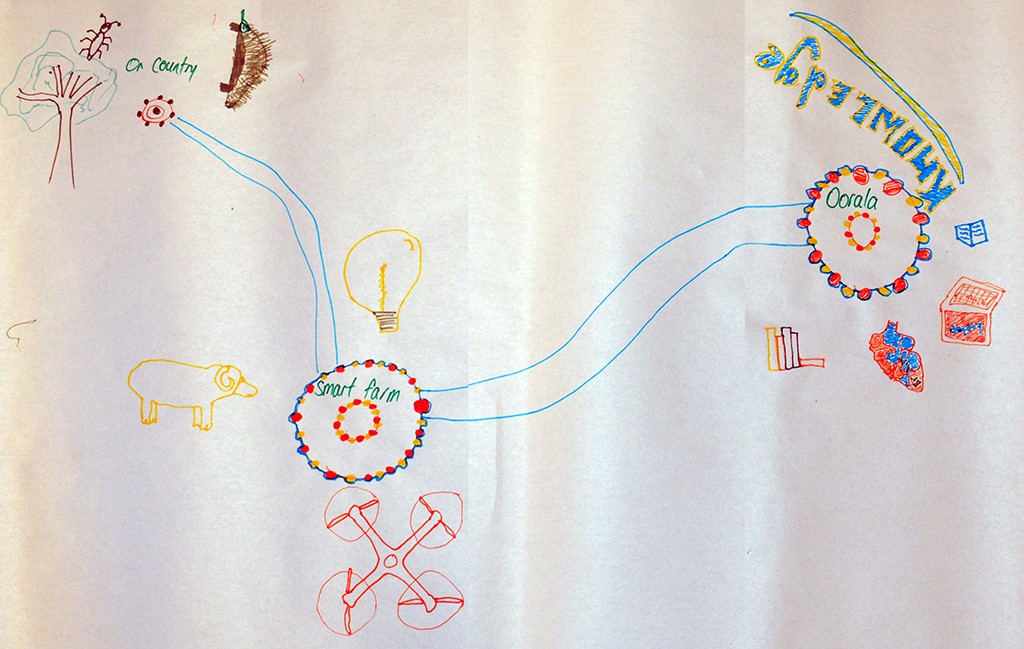 They did this, not by using a numerical system as in Western society, but through describing the relationships of different entities, be they hills or constellations. For an oral culture, the journeys of ancestral beings contained much vital knowledge of their environment, even describing sea level rises that occurred 10 000 years ago (Nunn and Reid, 2016). Extensive ecological knowledge, allowed Indigenous people to harvest country sustainably and to safely use fire as a management tool (BOM, n.d.).

Indigenous Mathematician Chris Matthews[1] (2012) has developed a technique whereby storytelling is used to create relationships between people and mathematics. By promoting the use of symbols, which can later be transformed into algebraic terms, simple maths stories can be represented through Art, drama and dance.

In this activity, the map-making exercise is not only a recognition of the power of story in transmitting knowledge, but also an acknowledgement of the skills demonstrated by Aboriginal people as some of the World’s first cartographers (Jaconline, n.d.).

Often knowledge of country could be recorded in a ground map, recording the presence of prominent features, sacred sites, hunting grounds, food sources, campsites and, most significantly, in arid areas, the presence of waterholes. These plan views would traditionally have been drawn in the sand or dirt, but are now a major form of contemporary Aboriginal Art.

These maps are deeply personal; describing the journeys, knowledge and relationship of an individual to Country. The map-making activity is an opportunity to reflect on the day’s activities and reinforce learning.

Review of our activity at UNE

Many students who came to the STEM Day at UNE created maps of their journey all the way from school, including the bus and the Oorala Centre in their drawing; others focused on an animal species, most notably the Echidna. The Echidna was of particular interest as this was the totem of Auntie Lesley Patterson, an Elder from the Banbai nation, who was helping us with our activities.

Some students drew maps using traditional Aboriginal symbols for campsites and waterholes. Whilst we did not introduce students to the concept of symbols or planviews as outlined in Jaconline (n.d.) and the Painting Country short video (Australian Screen, 2000), these are resources, which have the potential to enrich this activity. One resource we used was ‘Tracks, scats and other traces: A field guide to Australian mammals’ by Barbara Triggs (1996), which allowed the students to incorporate the tracks of animals species they may have encountered traces of in the field activities.

Matthews, C., 2012. Maths as storytelling: Maths is beautiful. Aboriginal and Torres Strait Islander education: An introduction for the teaching profession, 94-112.