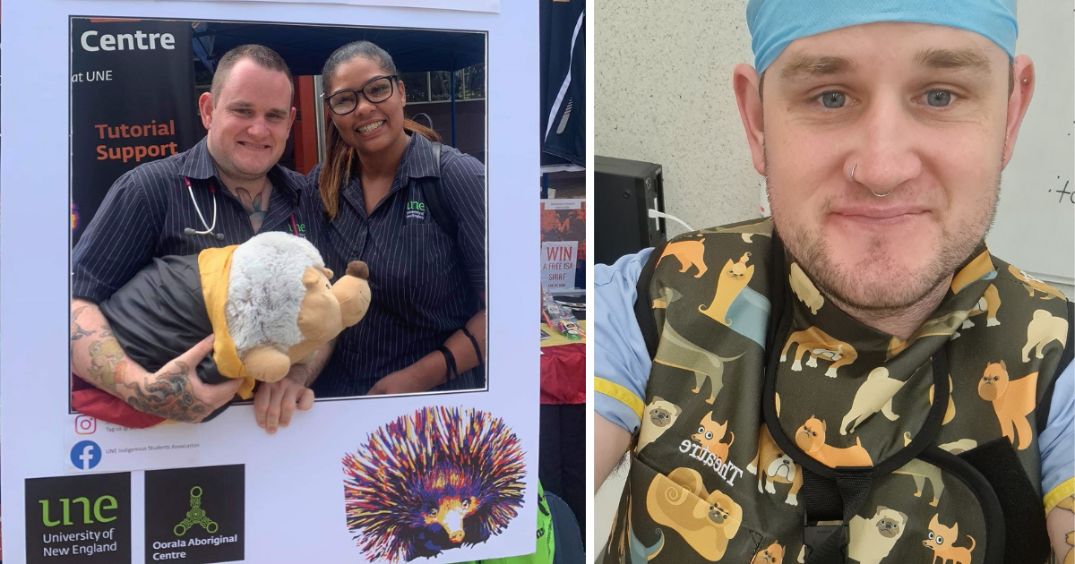 Image: Ashley Kirby at a UNE event; and in work mode.

Growing up with ADHD, Ashley Kirby remembers his childhood as having “difficulty with studying, making it hard to find friends, and getting bullied a lot”. Despite his constant battle, he refused to let it beat him. After leaving school in year 11, the young Canberra resident’s passion for nursing led him into the worlds of voluntary healthcare, hospitality and public service before he landed a great role in a private hospital. Now living in Goulburn NSW, Ashley has big goals.

Having obtained a Diploma of Nursing through TAFE, Ashley gained nine years of workplace experience before endeavouring to turn this into a Bachelor of Nursing degree with UNE.

He says he heard about UNE through a colleague, who described a “fantastic reputation for that supportive network and really setting people up to succeed”. “So that's why I chose - and I did need - the online setting as well, with work and all the other commitments that you get as a mature-age student.”

Ashley says he’d had a few false starts with other unis by then, and was starting to think, “I'm too old … I've left it too long, it's a bit late for me to start this”. “And the first person I met through the uni was 55 - so I can't really say that anymore," he laughs. Ashley developed a great network of supportive fellow students (see photo), including that person, Wendy, who sadly lost her battle with cancer last year.

Ashley says his schoolyard struggles also drove him to be part of Oorala’s peer mentoring program for Indigenous students. “Working as a nurse, we worked really, really hard on closing the health gap - but you know, there's such a big gap culturally and socially in so many other ways.

"Being an Indigenous scholar, that program is about mentoring people - but it's also about making them feel the way I felt.” He wants Aboriginal and Torres Strait Islander students to know they have “every chance of succeeding and being doctors and being the next president … They can do anything”.

Ashley is due to graduate with his degree in December this year, and his next goal is to become a doctor.

“I'm actually applying to try and get into medicine so that I can focus on Aboriginal health,” he says. “That’s the wonderful thing about being a nurse: I’ll be able to work and utilise this degree during that next four to five years of study.”

Ashley shines as beacon of hope for those who don’t complete high school but have aspirations to achieve later in life. He’s a big fan of alternative-entry schemes, such as UNE’s TRACKS tertiary preparation program.

It really does pave the way for your future.

"I can’t emphasise this enough, advocating for those programs and getting more people into them.”

He says continual learning is his major tip for success. “You just have to study, then there’s no reason why everybody can’t make it across the finish line. Really be reflective with yourself.

"You also need to give yourself those days where you just listen to music and play with your dogs.”