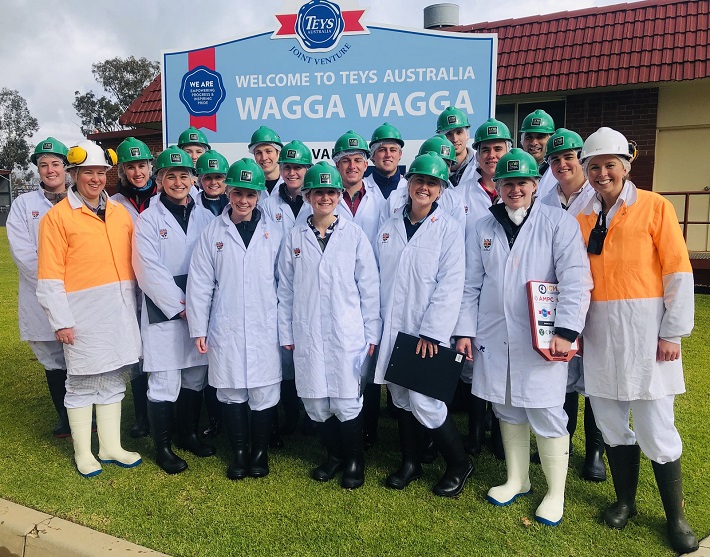 The UNE Intercollegiate Meat Judging (ICMJ) team have steaked their claim on numerous prizes at the 30th Anniversary ICMJ competition awards at the Coles Presentation night on Saturday in Wagga Wagga, NSW.

The evening was celebrated by over 150 students, 38 coaches, multiple industry sponsors, supporters and alumni.  The founder of the Australian ICMJ Association, Mr John Carter presented the John Carter Founders Buckle to the Individual Overall Champion Kate Werfel from the University of Adelaide and Individual Overall Runner Up, Kieran Smith from the University of New England.

Claire Marriott, Jen Mitchell, Kieran Smith and Jess Paton were also announced in the top 10 finalists and will go on to participate in an industry training week in South East Queensland in September. Five students from the top 10 finalists will be selected for a tour of the American meat industry in the New Year. Ben Wieland will also join the industry training week as the UNE coaches’ selection for further development.

The week-long conference kicked off on Tuesday, July 9 and involved industry presentations, sponsored dinners, hands-on workshops, a careers expo attracting 44 companies from across the Australian meat and livestock industries and the meat judging competition.

ICMJ President and UNE Senior lecturer in meat science, Dr Peter McGilchrist said the performance of the UNE team this year was fantastic.  The student’s achievement was testament to dedication by the individuals and their coaches.

“Our program has absolutely achieved our goal of inspiring and developing future leaders of the global red meat industry,” he said.

“The development of the students throughout the extensive training and across the week is immense. It really highlights to them the vast amount of opportunities that exist in the red meat industry.

“The students interacted heavily with companies at the careers expo and took full advantage of every opportunity to advance their knowledge and networks. The students and their coaches are clearly committed to a career in the global meat industry.”

Dr McGilchrist said the success of ICMJ would not occur without the continued support of sponsors, including MLA, AMPC, UNE, Australian Country Choice and Fletcher International.

Kieran Smith said “ICMJ was in invaluable experience and allowed me to broaden my knowledge of meat processing, quality assessment and methods of value adding, at the same time networking with industry delegate and like-minded peers from Australia and international teams.”

“The conference highlighted that changes within the meat industry need to be done with the consumer front and centre as they are the key market drivers” said Kieran Smith adding that “insight into changes and tech developments occurring across industry to make food production more efficient and sustainable in the future are very exciting.”