Easing the pain of separation 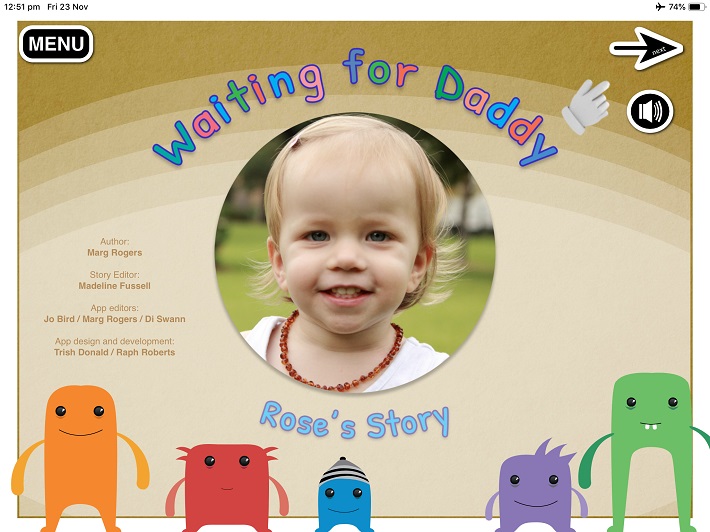 Every year, thousands of Australian Defence Force (ADF) personnel spend Christmas on duty in far-flung corners of the world, away from home. This year, a unique product could provide some comfort for the young children left behind.

The imaginative app Waiting for Daddy: Rose's Story - devised by a team at the University of New England (UNE) - tells the story of two-year-old Rose and her father's lengthy overseas deployment. It uses a narrative, photographs, games and other activities, all backed by solid research data, to help toddlers, pre-schoolers and school aged children (aged 2.5-8 years) struggling with long-term separation.

"Children of this age have very simplistic notions of time - it's today, yesterday and tomorrow - so deployment periods of two to nine months can be very difficult," said UNE early childhood educator Marg Rogers. "These children can become increasingly stressed or whingy, have trouble sleeping and suffer nightmares. Long-term fatigue builds up for both the child and the parent at home, causing enormous strain, and this can impact the child's social, emotional and cognitive development and their education."

The app is based on a series of e-books Marg wrote during her PhD while working closely with defence families to understand the emotional, social, cognitive and physical upheaval. "I was interested in what the families did to help their children build resilience, and hoped to identify the resources and services they already used and those they believed were lacking," Marg said.

What she found is that many families have a little story to tell children about where their parent was, why they went away and when they were coming back. "They go through this narrative with the child to prepare them three or four weeks in advance, sometimes using a globe, and I found that it gave children a real sense of security," Marg said.

Discovering that defence families were not usually represented in Australian storybooks, Marg set about producing her own. "I hope my e-books and now the app they inspired help children to see themselves as belonging to the Australian community and that they are not alone in what they experience," Marg said. "The aim is also to engender understanding and empathy from others in their learning environments, like their peers, educators and other parents."

"We're encouraging parents to use the app with their children as a conversation starter and hope it will provide some consistent language for them to use," Marg said.

"Early feedback has been very positive and we think it will have applications not just for Defence families but also fly-in, fly-out (FIFO) families."

Given the paucity of primary research studies of young Defence children in Australia, Marg and Jo will collect data from parents, educators and peers on the effectiveness of the app. "My study was the first one to gather information about what the children of ADF personnel go through and the app is an example of using that research data in a different way to traditional journal articles and book chapters," said Marg.

Marg hopes her recommendations from the study will be used to leverage for organisational changes within the ADF to better support families - namely giving them more notice of deployment so they can begin discussing it with their children, limiting the length of deployments and reducing the relocation of defence families.

Waiting for Daddy is free to download for Ipads (https://itunes.apple.com/us/app/roses-story/id1439753804?ls=1&mt=8) and Raph plans to work on an Android version.

For copies of Marg's e-books, go to http://www.defence.gov.au/DCO/Family/kids/Programs-products.asp