From shearing shed to medical graduate 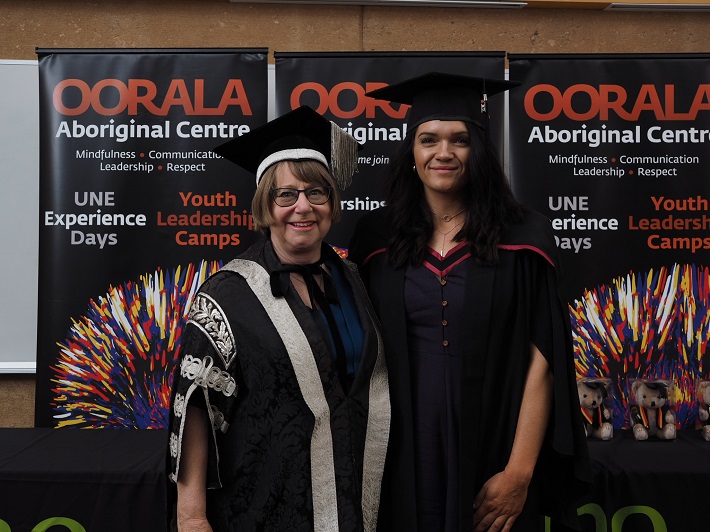 Wiradjuri woman Kerby Siemsen will see long years of study pay off when she graduates with a Bachelor of Medicine at the University of New England’s Spring Graduation this weekend.

Kerby is the first female Aboriginal student and only the second Aboriginal medical student to graduate from UNE’s School of Rural Medicine since the introduction of the Joint Medical Program in 2008.

What makes Kerby’s achievement even more special is that she did not finish high school and had to complete a TAFE tertiary preparation course before she could consider tertiary education.

“I dropped out in Year 11 and worked in the shearing sheds for a long time before starting to study,” Kerby said.

Kerby also admits that her decision to study medicine at UNE just kind of happened.

“I didn’t really know any doctors before starting university and I didn’t have a doctor type role model. I had the intention of studying to become a dentist before I realised that being a dentist, doing the same thing over and over would be pretty boring.  I thought medicine had more variety, let’s do that and here I am. I just gave it a go. I actually didn’t think I’d get in so it was very exciting to get my acceptance letter.”

While Kerby concedes that it all felt unreal at the beginning of her studies and that she sometimes felt she didn’t belong that too has changed.

“Initially I felt like didn’t deserve to have my place in the JMP but now I finally feel like I deserve to be here and I’m proud of the hard work I’ve put in and of my achievements,” Kerby said.

Kerby will celebrate graduation with her grandparents, dad and sister who have travelled from her hometown of Weethalle in Central West NSW to be with her, and close friends.

“My Nan has played a huge role in my success. She has always been supportive of the things I do and has been a great role model for me.”

“The student support officer at Oorala was a fantastic mentor and a great person to talk to as well as a shoulder to cry on. She was very empowering and even after a five minute chat I felt motivated.”

After graduation Kerby, who is currently living in Inverell and working at the Warialda Medical Centre, will move to Wagga Wagga in January to complete her two-year internship. She has a Defence Force sponsorship and will start her return of service in 2021. Kerby also hopes to finish her GP training before leaving the Army.