When questions lead to ants

Published 11 August 2018
Insects run the world, Kirsti Abbott says, and science is our vehicle for understanding how they go about it 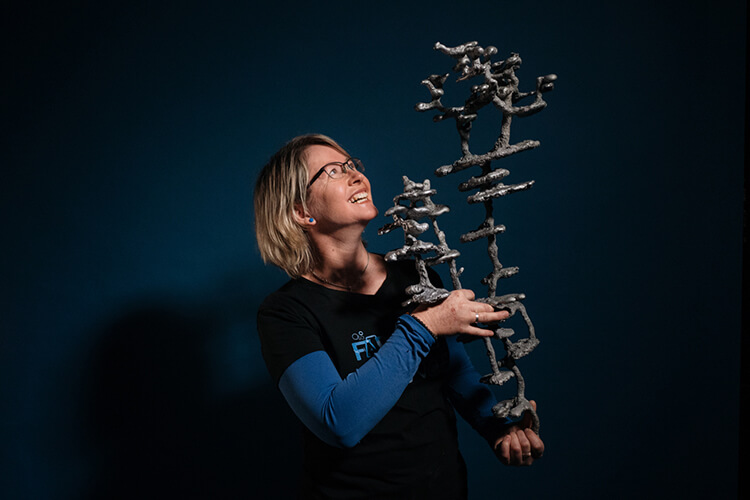 It was a career in performing arts, not science, that beckoned Kirsti Abbott when she completed high school in Armidale, but her innate curiosity for the natural world eventually trumped dancing.

"I wasn't a top science student but I fell in love with insects at UNE during my gap year, raising caterpillars and moths for researchers in the zoology department," she says. "I had some great scientist role models, who travelled the world and returned with amazing stories of adventure, discovery and freedom. That sounded like a great life."

Since then, Kirsti has studied marine biology, biochemistry, ecology and entomology.  Her passion for insects, particularly, has taken her offshore to islands, and into farming paddocks, tropical rainforests and school playgrounds.

"I soon realised that all the action was with insects - they are the little creatures that actually run the world," Kirsti says. "The smallest of creatures play a big role in our ecosystems, and ants, well they literally and figuratively connect us to the earth."

It was on Christmas Island, studying the impacts of the yellow crazy ant on the natural environment for her PhD, that ants really got under Kirsti's skin. "They are so well sculpted, adapted and diverse, and also really beautiful," she says. "Under the microscope you can appreciate their spines, textures and spectacular colours. But what ants do for our earth is even more impressive. In the top two metres of soil, ants are responsible for so many ecosystem processes - nutrient recycling, aeration and the soil movement that the carbon cycle depends on. It underpins everything that grows on top."

Not that Kirsti has much time for ant research these days; she's too busy sharing her passion for STEAM (science, technology, engineering, art and maths) with students and communities throughout northern NSW in her role as leader of the UNE Discovery program. That focus on delivering outreach and engagement experiences means that Kirsti now sees herself more as a change maker.

"I would like to see science embraced more in the education system and for people to increase their confidence in experimenting with scientific processes and ideas," she said.

"I want to help change the perception that science is hard and that you have to be really smart to do it, and to integrate it more into our everyday lives.

"Science is about asking questions and seeking to understand the complexity of our world. It empowers us to make informed choices and to think critically. Science is incrementally building on knowledge; there's no one point in time when scientists would consider a problem completely solved; there is always more to know, more experiments, and different mistakes to learn from."

Right now, Kirsti is driving the redevelopment of the historic Boilerhouse on UNE's campus, transforming it into a discovery space that will help foster curiosity, creativity, collaboration, confidence and a can-do attitude from an early age.

But ants have a way of crawling into her life. Just last week she was approached byThe Guinness Book of Recordsto officiate on ant records, and each year Kirsti runs the citizen science project School of Ants, which aims to understand the diversity, distribution and diet of ants across Australia's landscapes. Thousands of school children participate, and the information they gather is uploaded to the Atlas of Living Australia.

"We can all be a scientist," Kirsti says. "It's fantastic to empower citizens to collect data and facilitate discovery. By asking and answering questions we can take on new knowledge of who we are and what we can be."