Studying as a fossil-hunting nomad

Published 29 March 2018
Tim Frauenfelder is living many a child’s dream – studying palaeontology, volunteering at digs and spending most of his days talking about dinosaurs. “Yes, I was one of those litt… 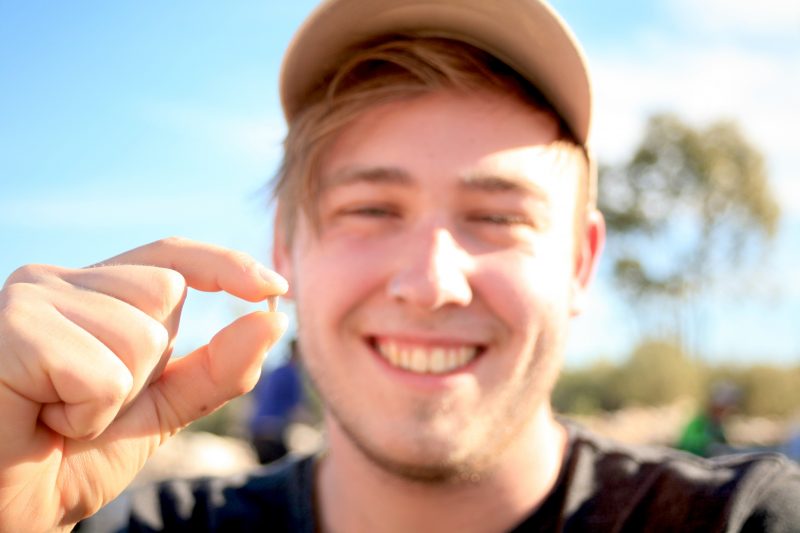 Tim Frauenfelder is living many a child’s dream – studying palaeontology, volunteering at digs and spending most of his days talking about dinosaurs.

“Yes, I was one of those little kids fascinated by dinosaurs and it’s stuck with me,” Tim says. “I used to watch all The Land Before Time [an animated dinosaur children’s series] movies with my Nan. Palaeontology was the only thing I was ever interested in at high school and it’s an interest that’s never left me. It’s what I love and I can’t see myself doing anything else. It’s been an incredible ride.”

So what is it that has so captivated Tim and taken him to Lightning Ridge, Canada and Argentina to study fossils?

“I think it’s that many of these dinosaurs don’t have descendents living among us today,” he said. “I’m interested in how they lived and what they did. Anything can turn up on a dig, out of the rock, and completely change your perspective on ancient life. And it’s pretty cool to be the first person to hold part of an extinct creature that’s 110 million years old.”

Tim’s special interest is sauropods and in particular the large species that lived on an ancient floodplain at Lightning Ridge, in western NSW. It’s a fascination that dates back to one hot, dusty day in 2014 on the very first day of his first dig in the western NSW outpost, when he found a single sauropod tooth as he sifted through mining tailings.

“These were massive animals that spent most of their day stripping trees and vegetation with these little teeth,” Tim said. “The teeth are the only evidence we have yet found of them in Lightning Ridge, except for some footprints and possibly one small, eroded limb bone. It’s a mystery as to how an ecosystem could support so many of these massive animals. They were the biggest dinosaurs around and had no predators.”

Tim finished his Bachelor of Science (Palaeontology) degree at the University of New England (UNE) at the beginning of 2017 and is now back to do Honours, having amassed some jaw-dropping practical experience.

As a volunteer within the UNE Paleoscience Research Centre, the 24-year-old has participated in three Lightning Ridge dinosaur and fossil digs organised by the Australian Opal Centre and Australian Geographic, learning valuable fossil collection, identification and curation skills.

In 2016, two months after completing an online palaeo course (DINO 101) at the University of Alberta, he was on a plane to Canada to further his field experience with that university’s dinosaur research group. An invitation to complete an advanced paleontology field course followed, then six weeks at Dinosaur Provincial Park excavating four sites and a month in the university’s lab learning how to prepare fossils.

During his undergraduate degree, Tim helped his supervisor and mentor, world-renowned dinosoaur hunter Dr Phil Bell, to mould and cast, CT scan and 3D print about 10 bones from a new dinosaur Phil identified from Lightning Ridge. When Tim finished, he spent seven months working as a tour guide at the Australian Age of Dinosaurs Museum in Winton, leading groups around some of the best-known fossil sites in Australia.

“Opportunities for fossil digs in Australia are pretty rare and generally very expensive for a student,” Tim said. “If you ever get an opportunity, like I did at Alberta, you have to seize it. You never know who you might meet, and at Alberta I was rubbing shoulders with palaeos from all over the world. From there, I was invited to Argentina and travelled to different museums in the Patagonia region, taking notes and comparing their sauropod teeth to the 20-odd now held by the Australian Opal Centre in Lightning Ridge.”

For his honours, Tim is hoping to organise field work near Surac, in southern Queensland, where the Griman Creek Formation of Lightning Ridge outcrops. “No-one has looked at this region for 40 years and I am hoping to uncover potential sites for new fossil discoveries,” he said. “The fossils in Lightning Ridge are only accessible by opal miners so it would be great to find something at Surac that we can excavate.”