Many ports of call for Chris Sharpley

Published 08 March 2018
After a decade as a school teacher, Chris Sharpley completed a psychology degree at the University of New England in 1972 that opened up a second career as a clinical psychologist. He taught a… 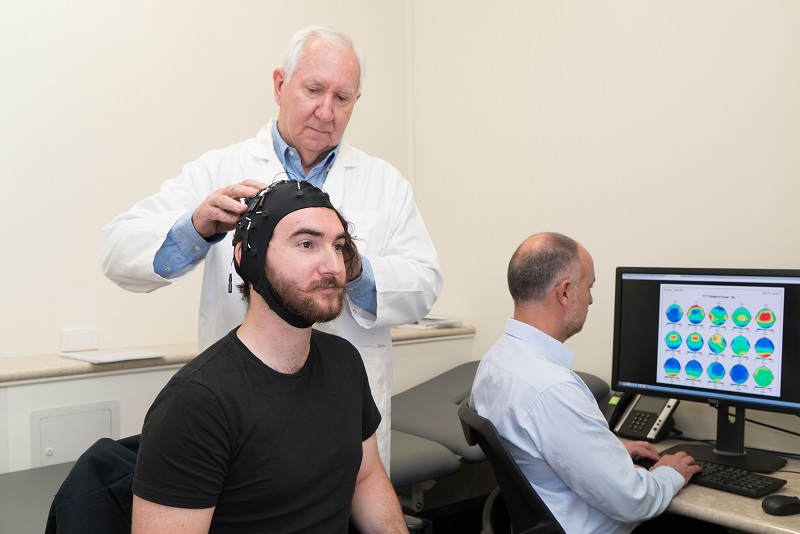 After a decade as a school teacher, Chris Sharpley completed a psychology degree at the University of New England in 1972 that opened up a second career as a clinical psychologist. He taught at Monash University and founded the Faculty of Health Sciences and Medicine at Bond University over the next 20 years, before “retiring” to sail the east coast of Australia. But a hunger for learning soon saw him charting a new course – retraining, again at UNE, to become a neuroscientist. The founder of UNE’s Brain Behaviour Research Group is proof that a curious mind can take you extraordinary places.

“It was in the classroom that I first began wondering why some children learn and some don’t, and that inspired me to study clinical psychology,” said Professor Chris Sharpley.”Then I got interested in what children do when they feel they are not being treated fairly, which led to a Masters and PhD in how rewards influence behaviour.”

Discovering the phenomenon known as “implicit extinction”, whereby rewards lose their reinforcing effect when they are given inconsistently to children, was “a shot in the arm” for the fledgling academic, who returned to his home state of Victoria, and Monash University specifically, to teach for the next 16 years.”Then I decided I wanted a change,” Chris said. “I applied for a job at Bond University, went on to establish its health and medicine faculty, and became its first dean.”

After seven years of that, Chris needed a long holiday and set sail up the Queensland coast, intent on retirement. “But after a couple of years I started thinking about how people handle the adverse things that happen to them and why some people get anxious and depressed and some don’t,” he said. “My clinical psychology training had prepared me to understand what people said and to some extent what they did, but not what was going on beneath their skin to cause this major burden of illness. So I went back to uni at the age of 60 to do a Bachelor of Science degree (at UNE), majoring in Physiology. Then I did a Master of Science by Research, with a thesis on the neurobiology of depression. I ended up writing a book about that.”

Once he joined the staff of UNE, in 2012, it wasn’t long before Chris was evolving again, this time by forming the Brain Behaviour Research Group. Bringing together a geneticist, biochemist, immunologist, medical practitioner, clinical psychologist and a single-cell neuroscientist, the team explores how physiological processes affect mental health, with a particular emphasis on the neurobiology of anxiety, depression and Autism Spectrum Disorder.

“We’re in the process of establishing two research clinics and have some great projects underway,” Chris said. “We’ve grouped the range of depression symptoms into subtypes, and now we’re working to see what genes and psychological precursors – genetic, biological and social – might be responsible for those symptoms.”

But there’s one very important rider. The research must translate into on-ground outcomes. “Laboratory work is great fun, finding out for its own sake, but I want to do something that might make someone else’s life or treatment better,” Chris said. “That’s what research is all about for me.”

And where better than UNE to do it? “Nearly all my studies have been at UNE; it’s a great place to study,” he said. “I wouldn’t go anywhere else. This is where my heart is. My wife and I have been developing a sheep property in the New England, to breed superfine Merinos, and now we’ve built a house. And my boat is on the market.”

Under no circumstances mention the R-word. “When people ask my advice on retirement, I can sum it up in one word: ‘Don’t’,” said Chris, who just turned 70. “Take time out to reflect, then go back and do the things you really love. I am one of those  pain in the neck people who gets a goal in his mind and works really, really hard to achieve it, and then I say ‘great, what can I do now?’ I don’t want to stop doing this, even if I live to be 100. There are lots of older people out there and they have something to offer. The challenge for them is to get involved and make a contribution; the challenge for (younger) others is to allow them to do so, no matter how old they are!”