Published 28 November 2017
Maritime archaeologist Ian McCann was in the dying seconds of his last deep dive in the waters off Japan. Two weeks of fruitless searching for a sign of the Spanish galleon San Francisco, which sun… 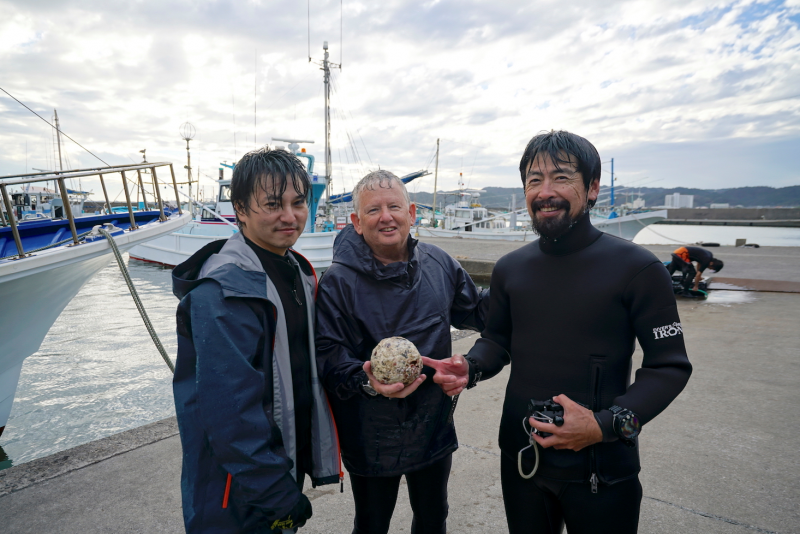 Maritime archaeologist Ian McCann was in the dying seconds of his last deep dive in the waters off Japan. Two weeks of fruitless searching for a sign of the Spanish galleon San Francisco, which sunk more than 400 years ago, were about to end. Then, through the murky water, he spied something lumpy on the sea floor amidst the waving kelp fronds.

“I scooped it up with one hand, clutched it to my chest and, hanging on to the shot line with my other hand, made my way back to the surface,” the UNE Master of Arts (Archaeology) student said.

Experts now believe that the lumpy object he hastily retrieved is a cannonball from the San Francisco and a vital clue as to its final resting place.

“It’s the first artefact found from the vessel,” Ian said, “and there are many people keen to find this wreck, which is one of the very few that haven’t been plundered by treasure hunters.

“It’s cargo would be worth millions today. The Japanese Government has been looking for it for at least 200 years.”

The San Francisco sank in 1609 on its way from the Philippines to Mexico, which were both Spanish colonies at the time.

Discovering its wreckage could provide all sorts of information about global trade routes, cultures, interactions and religions in the Southern Hemisphere at that time.

But the vessel contained other precious cargo, too – the Governor of the Philippines, Do Rodrigo de Vivero Velasco.

He was one of the 400 survivors when the San Francisco was driven onto reefs, and it was only by virtue of his good relations with the Japanese that the “unauthorised” passengers were permitted onto Japanese soil.

So warmly received was Velasco, in fact, that the Japanese Shogun constructed a Western-style ship – the first ever built in Japan – for him and his people to return to Spain.

Their Japanese crew became the first to cross the Pacific.

Weighing 2.8 kilograms, the cannonball is made of a rock type that matches that of other cannonballs found on Spanish trading vessels.

“We tend to focus on the big-ticket items when it comes to shipwrecks – the gold, silverware and ceramics, but even the simplest items can tell us a great deal,” Ian said.

“This cannonball reveals something about the technology of weaponry, the foundries that made the cannon and the materials they had available.

“For me, it’s really exciting because these vessels represented the first model for true world trade; the wreck site could teach us about the countries involved in that trade and what they traded.”

So what was a UNE student studying two 7th century anchors found in central Vietnam doing in the waters off Chiba province searching for the San Fransisco?

“In our research community, you volunteer to help with other dives and projects all the time,” said Ian, who brings not just extensive diving experience, but also expertise in ceramics and practical skills from a career in the offshore oil and gas industry.

“I have been working with the team from Tokai University for two years and this was our second major, two-week expedition.”

Meanwhile, back in Vietnam, Ian and his partners have been delving into the history of the anchors, and walking the shorelines looking for evidence of early habitation sites and ports that were used as part of the maritime silk route. He’s also making scale models of the anchors (which weighed about 200 kg) before building full-scale replicas to test their holding power and deployment/retrieval methods.

After 40 years of recreational diving, Ian said he was inspired to study maritime archaeology at UNE after a conversation with the university’s Professor Martin Gibbs, one of Australia’s leading marine archaeologists.

“I really felt that I had found in Martin a person who could help me get the best out of my research and direct my enthusiasm,” Ian said.

“We had common areas of interest, such as shipwreck survivors’ campsites, and early Spanish colonies and their maritime explorations in the Pacific.

“Maritime archaeologists are storytellers and there are so many great stories to be told. We help to open up the worlds of the past and reveal how people lived.”