Published 25 September 2017
The booming craft beer market has put some new twists on an old beverage, but the Kangaroo Island Brewery is going for an old twist – half a billion years old. The brewery is producing a limited-ed… 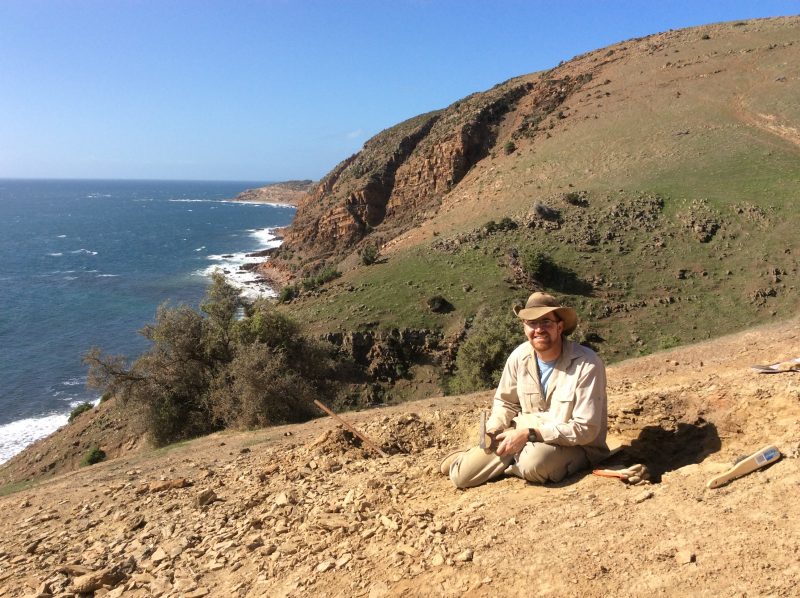 The booming craft beer market has put some new twists on an old beverage, but the Kangaroo Island Brewery is going for an old twist – half a billion years old.

The brewery is producing a limited-edition ale that commemorates a decade of ground-breaking fossil research on the island with a special beer filtered through fossil-rich shales that are more than 500 million years old.

Emu Bay Shale Ale celebrates the work of University of New England palaeontologist Professor John Paterson and his University of Adelaide colleague, Dr Diego García-Bellido, who, with their collaborators, have spent a decade quarrying a Kangaroo Island shale deposit that has changed our scientific understanding of the early evolution of animal life on Earth.

After their digs, the parched team has a tradition of stopping off on their way home at the Kangaroo Island Brewery to rehydrate and discuss the day’s work.

With the 10-year anniversary of their work on the island coming up, Prof Paterson and his crew suggested to brewery owner and head brewer, Mike Holden, that a commemorative beer would be the ideal way to mark the milestone. Mr Holden agreed wholeheartedly.

“I told the boys that the beer needed a special twist to make it unique and that’s when the idea to filter it through the shale that they dig their fossils out of came up,” he said.

So Emu Bay Shale Ale was born, with nobody more enthusiastic about the project than the brewer himself.

“It’s the closest thing you’ll get to drinking fossilised beer!” he said.

The brew was launched last Friday at a special ‘Science in the Kangaroo Island Brewery’ event, hosted by Prof Paterson and Dr Diego Garcia-Bellido.

“We’ll be talking about some of the significant discoveries we’ve made over the past 10 years, on what is one of the most important sites in the world for fossils from the Cambrian period,” Prof Paterson said.

“The Emu Bay shale contains a record of life over 500 million years ago, the point in geological time when we start to see the first true marine animals appearing on Earth.

“The site on Kangaroo Island is exceptional, as not only does it have fossils from this critical point in evolution, but they still have their soft tissues intact. Things like muscles, internal organs, digestive tracts – even eyes.”

Over the last decade, Prof Paterson and his team have collected and registered around 6000 specimens for the South Australian Museum, including several significant finds. The most important to date has been the large, complex eyes of Anomalocaris, often referred to as the ‘great white shark’ of the Cambrian Period because it was an apex predator that grew up to a metre in length.

The researchers’ work made the cover of the prestigious journal Nature in 2011, and “got palaeontologists quite excited”, Prof Paterson said.

“Anomalocaris had been known from other sites around the world, and we knew it existed at our site because we’d found other disarticulated parts of its body, but to find the exquisitely preserved compound eyes of this animal was pretty significant,” he said.

Prof Paterson recalls finding this specimen as a personal highlight from his 10 years of excavations on Kangaroo Island.

“I was splitting shale in the quarry and I popped open a piece and there looking back at me was a pair of eyes!” he recalled.

“The amazing thing about this specimen is that the lenses are perfectly preserved, and after careful study back at the lab I determined that there are over 16,000 of them in each eye.

“The only other animal with more lenses is a modern dragonfly, with around 28,000.

“It really was a lucky discovery.”

Despite the promise of more significant fossil discoveries, the highlight of this particular trip may well take place at the brewery.

“The brewery is situated between the dig site and our accommodation, so we’re regular visitors,” he said.

“We’re really looking forward to the Science in the Brewery evening and catching up with Mike and some of the locals to discuss the global significance of the Kangaroo Island fossils.

“But what I’m really looking forward to is drinking some Cambrian fossils!”