16th century engravings a rich addition to Museum of Antiquities

Published 15 August 2017
Two 16th century Roman engravings are the latest additions to the School of Humanities’ Museum of Antiquities, thanks to the generosity of independent scholar Lynette Jensen. The engravings a… 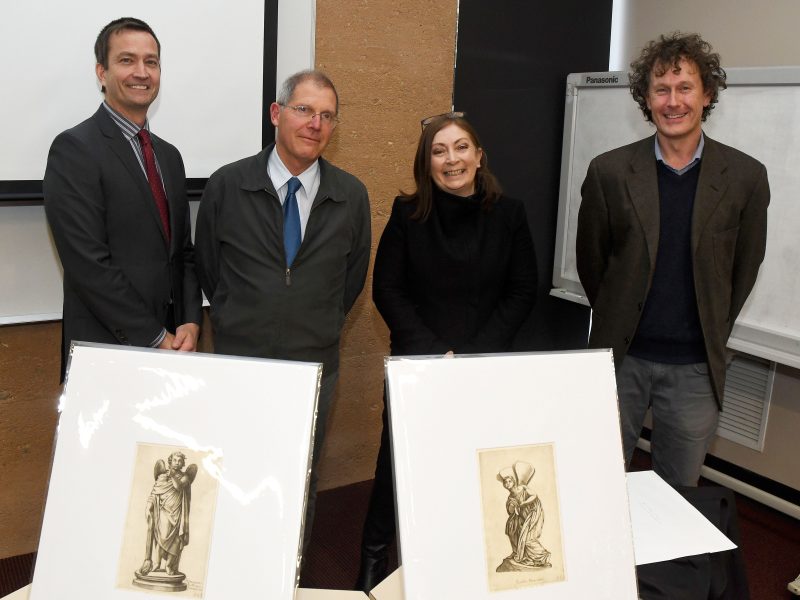 Two 16th century Roman engravings are the latest additions to the School of Humanities’ Museum of Antiquities, thanks to the generosity of independent scholar Lynette Jensen.

The engravings are the work of Roman publisher and printmaker Giovanni Battista de’Cavalieri (1525–1601).

They are on hand-laid 16th century paper containing important and detailed information about the statues they depict, including their state of repair and where they were housed.

One is Hymenaeus in Museo Garimberti (left) and the other is In aedibus Farnesianis (Psyche).

Museum of Antiquities curator, Dr Bronwyn Hopwood, said the works were an important addition to the museum as they give an insight into the collecting of antiquities and the display of ancient culture during the Renaissance and Medieval eras.

“They also tell us a lot about printmaking techniques and the material culture of the Romans, meaning our students no longer have to go to Rome to experience such significant works.”

While Ms Jensen is not an alumna of UNE, she has a connection via the Chair of Classics and Ancient History at UNE, Dr Greg Horsley, who was a mentor during her studies at Macquarie University. She donated the engravings in honour of Dr Horsley’s recent work on pagan angels.

Image: Director of the Office of Advancement, Dr Jason Ketter, Chair of Classics and Ancient History, Dr Greg Horsley, donor Lynette Jensen and Head of the School of Humanities, Prof Lloyd Weeks at the presentation of the engravings.