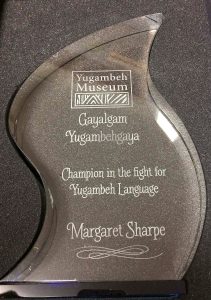 UNE adjunct senior lecturer Margaret Sharpe has been officially recognised as a ‘champion’ for her role in helping to revive and document the indigenous Yugambeh language of the Gold Coast and hinterland regions of South East Queensland.
The Yugambeh Museum bestowed the honour on Dr Sharpe during its recent NAIDOC week celebrations, hailing her as a ‘Champion in the fight for Yugambeh language’, in recognition of her decades of research into the language.

This work included compiling and publishing a dictionary encompassing Yugambeh language, as well the Bundjalung dialect of the neighbouring Northern Rivers area of NSW.
Dr Sharpe said she was “pleased and proud” to accept the honour, pointing out it was symbolic of how attitudes had changed over the last 30 years.

“Back then there was an attitude by some (but not all) Aboriginal people of not wanting whitefellas involved, but now there has been recognition of the importance of reviving traditional languages,” she said.

“There’s now a realisation that preserving the mother tongue of a region is extremely important; it shapes people’s thinking.

“Many Aboriginal people don’t know where their roots are, or have been brought up to be ashamed of them.

Dr Sharpe is also an expert on the language of the Alawa people in the Katherine region of the Northern Territory, and has published a dictionary of that dialect, including Kriol variations.

A scientist by training, Prof Sharpe’s other passion is astronomy and astrophysics, and she has managed to combine this interest with that of Aboriginal society, discovering that indigenous people were very much interested in the night sky.

“Any group that lives off the land has a lot of knowledge about the seasons and how they affect the stars,” she said.

“We now know that Aboriginal people did plant crops and cultivate fish in various parts of Australia.”
Dr Sharpe said Aborigines named many of the stars and constellations, and often these were different to European star groupings, such as the “Sky Kangaroo” and “Sky Emu”.

“The Sky Emu was recognised right across Australia, and it appears that there are also connections across Australia between the Sky Kangaroo and its association with initiation,” she said.

While she no longer has teaching commitments, Dr Sharpe can be found most days in her office at UNE, occupied on research projects, preparing for another field trip, or working on her Master of Science, which she is studying through UNE.