Published 03 July 2017
Efforts to halt biodiversity loss and promote sustainable development may be stalling around the world but UNE legal expert Professor Paul Martin is not prepared to give up without a good fight. Th… Efforts to halt biodiversity loss and promote sustainable development may be stalling around the world but UNE legal expert Professor Paul Martin is not prepared to give up without a good fight.

The Director of the Australian Centre for Agriculture and Law at UNE is leading the development of a new assessment for how well our environmental protection laws are performing and how they might be improved. And he’s sharing his method with colleagues from Brazil, China, Kenya, New Zealand, South Africa and the Solomon Islands as they work together to improve biodiversity protection globally.

Despite 150 government leaders signing the Convention on Biological Diversity (CBD) at the Rio Earth Summit in 1992, committing those countries to species and ecosystem protection, and fairer and more sustainable use of biodiversity, our international environmental record is appalling. Although thousands of legal instruments – from treaties to national legislation and council regulations – have been effective to varying degrees, they have failed to stop the loss of ecosystem and natural resources, which many fear is being accelerated by climate change. 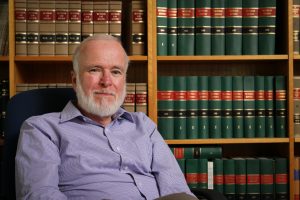 As a governing board member of the IUCN Academy of Environmental Law – the world’s major environmental law body – Professor Paul Martin is determined to improve the performance of national and international laws and policies.

“The CBD was meant to do more than cause member states to create new laws or protected areas, or other instrumental interventions,” he said. “Its ambition was to radically change the system of governance of the environment. It is clear that only part of this agenda has been achieved, even though many laws have been created.”

Professor Martin and two of his doctoral students recently returned from the annual Academy Colloquium in the Philippines, where legal representatives from universities across the world took stock of how well the international community is meeting its commitments under the convention. Using evaluation methods pioneered by Professor Martin, teams from a number of countries are now preparing country-by-country report cards, asking critical questions about the effectiveness of biodiversity protection laws. They are inviting lawyers, scientists and conservation practitioners to contribute to this important work.

Legal officer with the IUCN Environmental Law Centre in Germany, Lydia Slododian, said understanding what makes environmental law and governance effective is one of the greatest challenges the world faces.  “The current environmental crisis demands urgent and efficient legal responses that result in fast and significant changes on the ground,” she said.  “The questions that these teams are asking will tell us a lot about what works and what doesn’t, and what we need to do to get the future we want.”

Australia is one of only 17 “mega-diverse” countries in the world. Together, these nations account for more than 70% of the world’s biodiversity. Almost 10% of the world’s species occur only in Australia. However, we have a disastrous record of species loss since European settlement. Australia’s 2016 State of Environment report proved that Australia, like many other countries, is losing the battle to protect biodiversity on many fronts. Vegetation clearing, invasive species and pathogens, inappropriate fire regimes, cattle grazing and climate changes have all been implicated.

“We will only overcome these challenges if we make our environmental laws more effective, but also less costly and more equitable,” Professor Martin said.