Published 13 July 2017
A $427,000 bequest from a UNE alumnus will help establish a new research award at the University of New England (UNE), the John Vale Endowed Research Award. The endowment will be used by UNE’s Dist… 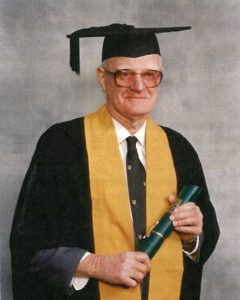 A $427,000 bequest from a UNE alumnus will help establish a new research award at the University of New England (UNE), the John Vale Endowed Research Award.

The endowment will be used by UNE’s Distinguished Professors to help offset the cost of attending research meetings, research conferences, initiating research projects, and in supporting the mentoring of early career researchers.

John Vale, from Grafton, held a lifelong passion for history, but it wasn’t until the age of 69 that he decided to turn that passion into a formal qualification, by undertaking an Advanced Diploma in Local, Family and Applied History at UNE as a distance student.

Mr Vale graduated at the age of 73 in 2003 and in the years following was a regular donor to UNE, but it was another passion that ultimately allowed him to make such a generous bequest, share trading.

The reclusive Mr Vale remained single throughout his life, and built up a substantial share portfolio which he managed from home by phone and mail.

UNE’s Director of the Office of Advancement, Dr Jason Ketter, said the University was extremely grateful for Mr Vale’s generosity.

“Such a generous bequest indicates John developed a deep attachment to UNE following his years as a mature aged distance student,” he said.

“And I’m sure he would be pleased that the John Vale Endowed Research Award will be used in perpetuity to address some of the most challenging issues facing our society today, as well as future generations, via UNE’s Distinguished Professors (research).”